A nine-year-old boy’s preening obsession with straightening his hair elicits a tidal wave of homophobic panic in his hard-working mother.

‘Pelo Malo’ means ‘Bad Hair’ and Junior is a nine year old growing up in a slum project with his single parent mother. He finds it hard to fit in and is constantly mistreated by his mother; this same mother dotes on his baby brother – who happens to have straight hair. Junior has curly hair – but apparently the absent father is the same for both of them.

His mother works for poverty wages and is not averse to doing anything to get her old job back as a security guard. Meanwhile poverty sticks to everything around Junior like a bad smell in towering estates that are all concrete and hopelessness – he still manages to dream and see some beauty with the help of his little girl friend. He also wants to be a singer with straight hair and will try any old wives tale to make his curls go straight.

This is an unusual film that was said to be a Venezuelan ‘Precious’ and I can see some parallels but little more than that. It is not a film that will have you ‘skyping home’ but it will make you think. The cinematography is actually quite good too, but the story did feel a bit padded at times – still it is good to see South America tackling issues of mixed race families, poverty and crime. 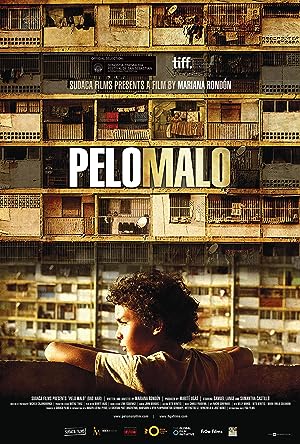