Four teens on the run from an orphanage spring a fellow orphan recently adopted by a rich family, then trash the whole house.

If you can find this movie, it is your destiny to see it. My dad rented it when I was eight. I made him copy it so I could watch it every day. Bad Manners(aka growing Pains, Goonies and Ferris Beuler were the only three movies that I would watch when I was a kid. That may give you some idea of the prestige of this movie. The guy who wrote this movie is a God. The scene in the bus stop is one of the most memorable scenes in any movie ever. Why does everyone start kissing when the fire alarm goes off? I have no idea, but I love it. My best friend Chris saw this movie too. We always talk about it. No one else I’ve ever met has ever heard of it. I used to think the orphan girl with the black hair in it was hot. I am about to see what other movies she was in. maybe she ended up doing a porn after this. I will have to check. 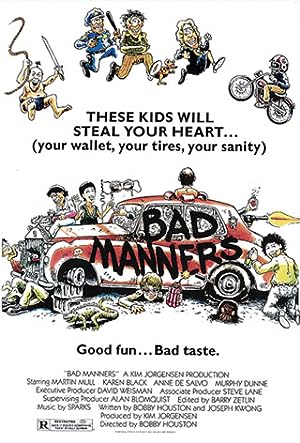