In Simon Amstell’s affecting, bittersweet comedy, a rising young filmmaker is thrown into emotional turmoil by a burgeoning romance and the upcoming premiere of his second feature.

So surprised at just how much I loved this film! Simon Amstel has clearly taken much from his own experiences, because the moments and situations are so beautifully nuanced, it must surely have been sparked from lived experience. I’m so happy this film exists.

Every character was so hypotnisingly layered. Everyone had a life beyond their screen time and I would be interested in following all of their respective journeys.

The theme of human connection and the struggle of letting love in is something that I profoundly related to. Love is always shown in a dangerously romantic way on screen, it’s so refreshing to see the complexity of the feeling for a change.

My only criticism is that it could have been nipped and tucked abit as a film… but I actually wanted more! I would love to see this as a series so we could explore the lives of everyone abit more, and also take our time in letting love in, just like the wonderful Benjamin himself.

Finally, just to comment on Colin Morgan’s central performance. Though Amstel’s dialogue is what stands out in every character, Morgan really runs with it and flys! Had me chuckling all the way and many moments I was howling at the back of the cinema.. especially when it came to the difficult choice of which bottle of water to purchase.

I was feeling abit glum and grey this weekend, but I came out of the cinema and my sun was shining. I hope this film gets the audience it so truly deserves, and all people deserve to see a film like this.

And Jack Rowan’s bum is fantastic isn’t it?! 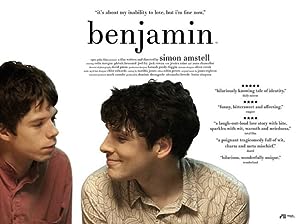