Manu and Nadine lose their last tenuous relationship with main-stream society when Manu gets raped and Nadine sees her only friend being shot. After a chance encounter, they embark on an explosive journey of sex and murder. Perhaps as a revenge against men, perhaps as a revolt against bourgeois society, but certainly in a negation – almost joyful in its senseless violence – of all the codes of a society which has excluded, raped and humiliated them. Controversial for its violence and real sex scenes: a vividly nihilist road movie set in France.

I’m not exactly a Francophile. I love the cooking but hate the restaurants. French is one of the great languages of the world, but I find the French attitude to it xenophobic. Yet there is one thing that always stirs my passion. I admire them for it. I wish we had an ounce of it in Britain.

The best known examples of course are the film protests in 1968 – a time when everyone was protesting about everything. But they helped, indirectly, to restore the international prestige of French cinema. When Baise-Moi was banned shortly after release in 2000, there were spontaneous street protests. Now this is a bit different – the film’s artistic merits or lack of them are still a matter of debate. But I take my hats off to the French. I would love to see the British protest in the name of cinematic freedom. (The ban was eventually lifted after separate protests signed by Parisian intellectuals.)

As you will already have guessed, the issues around this film are complicated. And they get worse. There is a tendency to react emotively to any highly charged sexual issues. This tendency can maybe blind us somewhat when it comes to analysing more important ones.

This is a film made by women, about women living on the fringes of society. I was once importunate enough to argue with acclaimed filmmaker Gaspar Noé (after a public screening of Irreversible) that his film didn’t address the issue of rape as well as Baise Moi. I still believe that, although Irreversible is a landmark film for other reasons entirely. Most films about rape follow male-orientated story lines. They often emphasise the purely physical, violence-aspect (as in Irreversible) or have a strong woman seeking and finding redress (as in The Accused). The reality is that most rape victims are traumatised mentally and emotionally. Physical hurt as a result of violence is no less an issue, but a separate one. Although The Accused looks at some of the metal trauma, it ultimately plays out as a success story. Few rape victims take on such a masculinised determination to succeed against the odds. Odds which are still stacked against the victim.

What I liked about Baise-Moi is that it eschews the woman-survivor scenario for a more realistic picture of lasting psychological damage. Films that show the real horror of rape may discourage it more than ones that show women ‘getting over it.’ One of the victims of rape in Baise-Moi actually ‘lets’ her assailants get on with it, commenting to her friend afterwards that at least they didn’t wind up dead. The rape (and the violence) of Baise-Moi convinced me that she probably hedged her bets wisely. Her lack of struggle didn’t, in my mind, make her any the less a victim. And neither did the unpleasant fact that she was a part-time prostitute make her any more ‘deserving.’ This is something that it is not easy to live with. As a society, we have moved past the point where a girl in a short skirt acting flirtatiously (The Accused) is ‘asking for it’ or ‘deserving of rape.’ But where is our cut-off point? The marginals in society are often seen as dispensable. No-one wants to acknowledge them – least of all mainstream filmmakers. Yet they can be just as much victims.

Another thing I like about Baise-Moi is that the two girls that form a bond and go on a road trip are fully developed as characters. Like most young women, they enjoy having a good time and going after boys. But they have been mentally scarred. One of them has been brutally gang-raped and the other has watched her only friend being killed. They are not ‘good girls gone bad’. They are fairly ‘bad’ already. But they are still victims. Beneath their bravado their mental deterioration is apparent. In Black Snake Moan, the horrific effects of a redneck woman’s history of sexual abuse and rape are given some time through Christina Ricci’s great acting, but the plot is driven by male characters towards a stupid and not very believable conclusion. In Baise-Moi, it is the trauma that the women went through that drives the plot. (Sadly one of the main actresses, Karen Bach committed suicide in 2005.) The film is arguably weakened by a change of style. The initial scenes are very realistic, including the horrific rape. But then the main protagonists go on a killing spree reminiscent of Natural Born Killers on trash aesthetic. Perhaps this is appropriate – they live in la-la land as long as they can. But it will confuse some viewers.

“To reclaim women’s rights over their true sexuality, to seize it back from the male gaze. It’s always men who have a problem with a woman’s sex: that’s their problem, not ours.” A noble aim by the filmmakers. But will feminists baulk when they realise that one of the directors and two of the stars have previously worked in hard-core pornography? “There’s no logical reason why sex scenes should only be in porn,” says Trinh Thi. Indeed, Hollywood agrees. I am sure there are convincing psychological arguments, but realistic sex still upsets many audiences (personally I have more of a problem with overly-realistic violence).

This analysis has outstayed its welcome. I have laboured the good points of the film and rated it accordingly. On a technical level, the idea of using only natural lighting also works well. But apart from its stand against censorship and the way it deals with rape, the film is lacking in many respects. It was made on a very small budget and it shows. The acting is acceptable but not much is demanded from actors in terms of interiorisation and so on. There’s a good soundtrack. But the main reason to see the film may probably be to argue over the issues it raises. 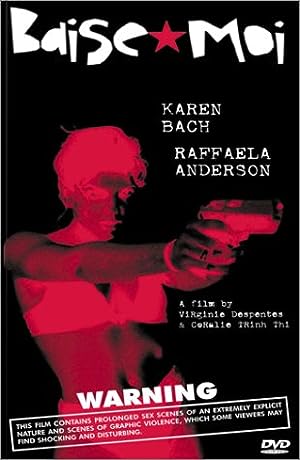 Be the first to review “Baise-moi 2000” Cancel reply