Reine is supposed to go to a summer camp called ‘Childrens island’ but decides to remain in Stockholm over the summer while his mother is working at a hospital. She thinks he is at the camp and he tells her he his. We then follow him around Stockholm that summer and see what he encounter on the path of life.

10 year old Renee lives in a Stockholm suburb alone with his mother. She has only limited time and heart for her boy. Her lover Stig is a scary and frustrated loser. When Renee’s mother leaves home for a summer job in another town, Renee is “deported” to a summer camp. But he chose to stay home alone, living one last summer of innocent childhood in the city. He soon meets and befriends some of the lower existences and gradually slides towards criminal activities. The boy has a very special live-philosophy: Lust is what makes grownups crazy – and only children are sane. And his experience of miserable and selfish adults only supports this view. But the boy knows, that he himself will come into puberty – where everything ends! Therefore he makes a daily inspection of his genitals in search of pubic hair. He thinks that hair is the sign of corruption, and he befriends an adult young woman with no hair at all. He thinks she is “pure”, but the bald woman turns out to be just as lustfull and selfish as everyone else. There are a lot of dirty words, sexual references and nudity in this movie, which might offend some. It could even be considered (child)-pornographic. But it is a highly artistic and very conscious film, and it has been shown several times on Swedish and Danish TV, public channel prime time. The film gives a very remarkable and outstanding, but also depressing, view of childhood. 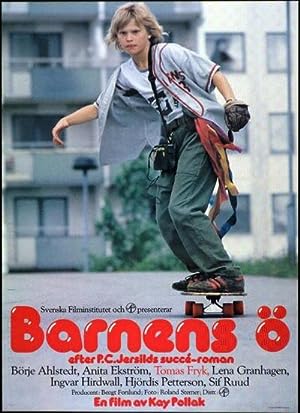 Children's Island (1980)
109 min|Drama, Romance|25 Dec 1980
6.7Rating: 6.7 / 10 from 715 users
Reine is supposed to go to a summer camp called Children's Island but decides to remain in Stockholm over the summer while his mother is working at a hospital. She thinks he is at the camp,…
Director: Kay Pollak
Creator: P.C. Jersild (book), Ola Olsson, Kay Pollak, Carl-Johan Seth
Actors: Tomas Fryk, Anita Ekström, Ingvar Hirdwall, Börje Ahlstedt