Home » Non-English with Subtitles » Bashu, the Little Stranger 1989 with English Subtitles on DVD

Bashu, the Little Stranger 1989 with English Subtitles on DVD

During the Iran-Iraq War, Bashu, a young boy loses his house and all his family. Scared, he sneaks into a truck that is leaving the area. He gets off the truck in the Northern part of the country, where everything from landscape to language is different. He meets Naii, who is trying to raise her two young children on a farm, while her husband is away. Despite cultural differences, and the fact that they do not speak the same language, Bashu and Naii slowly form a strong bond

This is one of the nicest movie I’ve ever seen. I just would like to comment on the language. This is an Iranian movie, but the language is not Persian as the small boy (Baashu) speaks Arabic and the region where the film has been shot is Gilaan or Mazanderaan, therefore the language is Gilaki or Mazanderi. It is not really understandable to Persian speakers. So you might need subtitles to understand it. I loved this touching movie. It is the story of a Baashu, a small nomad boy who escapes combats in the south of Iran (during Iran-Iraq war). He jumps in a truck and finds himself in an unknown place where he understands nobody’s language. A farmer woman takes him under her protection. The film is about differences or I should say humanity and common feelings among all humans, like love and compassion. I will not tell you more, but advise you to watch this exceptional film. I wish you a nice moment watching this wonderful movie. 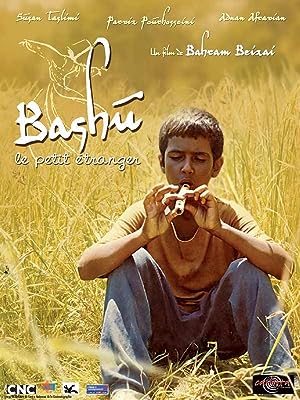 Bashu, the Little Stranger (1989)
120 min|Drama, War|N/A
8.1Rating: 8.1 / 10 from 2,113 users
Lost in a foreign part of the country after running away for his life, a little boy whose family have been killed during the war is saved and trained by a middle-aged woman.
Director: Bahram Beizai
Creator: Bahram Beizai
Actors: Susan Taslimi, Parviz Poorhosseini, Adnan Afravian, Bashu

1 review for Bashu, the Little Stranger 1989 with English Subtitles on DVD