A huge, run-down apartment in Berlin Mitte. Two women and a man, rehearsals for a movie about love and sex, that will never be shot. Acting and reality mingle into a dangerous melange. Berlin is the shelter, love is impossible, flesh is the law.

Is it a philosophic porno? Its a little fine stage play, on its best way. Its about desire, obsession for mankind, and so this can be seen as a bridge to be a political movie. The figures are clean and with our empathy They are confronted with our hard reality and all its contradictions. So hardcore? The camera is with the actors, and so they are not lost helpless in their fears, we can smell them and embrace them, we all need love like this. Its some kind of Zeitgeist-movie, but not only German / Berlin. The movie is a laboratory of our feelings, and life.. Its the game with ourself confidence, and tries to understand the stranger in us. Thats really thrilling like an action movie, Bedways it’s a movie on the road, a trip through our soul, lets keep there, we are all artworks! Nude bodies are not as an end of itself, we start being our selves in bare bodies. What is love, sex, how do I find it? Is sex love? Do I want great love or better sex? Is love sexy? Extential questions, not all answered, but great films put questions, not answer all questions. Its more than a erotic asking! This movie you can see again and again! 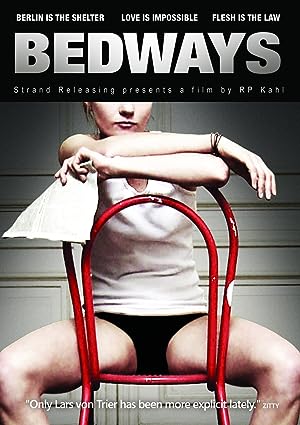