An edgy drama about a gay teen’s tumultuous decent into drugs and anonymous sex, Wrecked smashes cinematic taboos while it spins its cautionary tale. Ryan is an earnest 18-year-old trying to develop a career as an actor and getting his life on the right track. This course is quickly threatened with the sudden arrival of his sort-of ex, Daniel, who arrives at Ryan’s door wanting a place to stay and offering the promise of a normal, loving relationship. But Daniel’s drug addiction and attitude towards casual sex derail any hope for normalcy and soon ensnares Ryan in his own downward spiral. Handheld cameras, a hot young cast and a boldly upfront approach to sex combine to make Wrecked a unique film experience.

I think the review by GayFilmViewer says it all, except that I disagree on one point, I would add, abysmal acting. Seen with the rest of the cast, I would grudgingly agree that the lead gives a decent performance. Comparing his acting to that in similar films, it is tepid. Story line, nil; acting, one (for the lead); photography and editing – at times, bizarre colouring and sound, nil; this film is fake, unengaging and unpleasant. This is gay cinema at a total low. (Review refers to DVD version; just seen.) A pity this was dragged out to over an hour; 15 minutes is long enough. In Afrikaans, there is a lovely expression: “.. vol strond”; Shakespeare’s line from Macbeth more than suffices: “Full of (unpleasant, bizarre, inept scenes), signifying NOTHING. 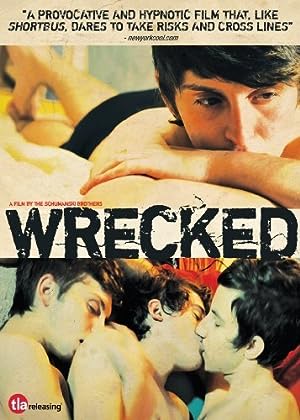