This film looks at the 1950’s muscle men’s magazines and the representative industry that were popular supposedly as health and fitness magazines, but were in reality primarily being purchased by the still underground homosexual community. Chief among the purveyors of this literature was Bob Mizer, who maintained a magazine and developed sexually inexplicit men’s films for over 40 years. Aided by his mother, the two maintained a stable of not so innocent studs. At the end, the film moves into a court room drama as Mizer is tried for running a male-prostitute ring in the early 60’s. Clips of Mizer’s actual films starring individuals, such as Jack LaLanne and Joe Dallesandro, are included.

Most of the guys interviewed in this documentary wouldn’t know who Dorothy is. Even men who cross the (often thin) line between male modeling and hustling do not know that much about campy gay culture. BEEFCAKE deals mostly with this fact. The film is precisely about the detail that most of the models (at least initially) did not realize they were posing mostly for homosexuals. So, it is very unfortunate that catty remarks that may taint a potential viewer’s image of the movie are often highlighted. Many Film Critics have done the same before. Tackling stereotypes is also part of BEEFCAKE’s agenda, and the movie succeeds in addressing the points I’ve just mentioned. The flashbacks and dramatization/reconstruction of events are woven into the narrative as well as can be expected. In fact, the editing exceeded my expectations. After all, this type of documentary mixing actual footage, recent interviews, narratives, “faux” past footage, and obviously recreated dramatizations is hardly innovative. But it does work very well here. It is all very coherent. All the added 50s and 60s touches introducing interviewees are actually quite clever. This film defines a period that may have gone forgotten. Dorothy or Judy have nothing to do with this film, except in the head of certain viewers, as in all films. This is one worthwhile documentary mixed with fictionalized events. 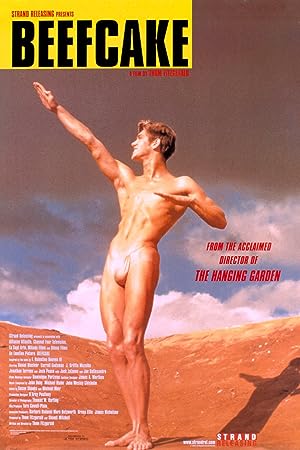