Behind Blue Skies 2010 with English Subtitles

Coming of age film that takes place in the Swedish archipelago during 70s about young Martin (Bill Skarsgård) who gets a summer job working at a hotel. The hotel manager Gösta (Peter Dalle) takes a liking to young Martin, takes him around while doing some very shady business deals outside of his hotel manager job.

Short summary of the film: Martin (played by Bill Skarsgård), a young man is growing up in Sweden during 1970’s. His family life is far from happy because of his fathers(Björn Kjellman) drinking problem. On the outside his father is a well respected civil servant but on the inside he’s , prone to manic depression, and abusive husband as well as an neglecting father.

Martins mother(Amanda Ooms) is weak, cannot stand up against her husband and can only watch as the family slowly unravels in front of her eyes. Martin wants run away and finally gets the chance when one of his friends gets him a summer job(at a hotel) out in the Swedish archipelago outside of Stockholm.

Martin quickly befriends Gösta(Peter Dalle)the hotel owner who becomes a father figure for Martin, teaches him about life etc. But Gösta is in involved in some very dangerous yet lucrative, highly dangerous business on the side….

Rarely do Swedish cinema become this well made, as this crime drama/coming of age story. This film is also loosely based on real life crime story “The Sandhamn gang” that was brought down by the police in the 1970’s.

The biggest surprise is the strong direction, acting and high production values regarding set designs, clothes music etc. Director Hannes Holm usually makes very mainstream Swedish rom coms, comedy dramas, that hasn’t made much impact on me but this is clearly(so far at least)his best film.

Bill Skarsgård is the son of famous Swedish Stellan Skarsgård (his two other acting sons are Alexander Skarsgård, Gustaf Skarsgård)does a pretty good job but most impressive is the sourrounding cast; Peter Dalle is very good(winner Goldbug award best male actor for this role), Björn Kjellman as the alcoholic father etc.

The only criticism one can say is that screenplay has some flaws, the story sometimes predictable, certain characters not that interesting but overall a very good Swedish film, easily compared to international productions such as: Lords of Dogtown (2005),A Bronx Tale (1993)etc.

Biggest surprise..? The dark, complex depiction of Swedish society during 1970s, were no one seems innocent. Please check up on Ted Gärdestads music on youtube, It’ll be worth it, I promise. 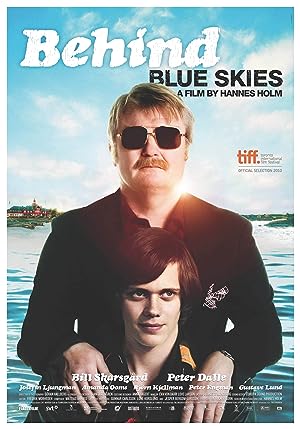 8 reviews for Behind Blue Skies 2010 with English Subtitles