Built on the artistic foundations of the island city of Halifax, Nova Scotia. Is Beneath the Skin. Filmed in the United Kingdom and Canada from first time directing-duo Michael Mackinnley and Aaron Ellis comes the story of a British Student shipped off to Canada after the death of his mother, he then meets an Aspiring American Artist who fled the violent actions of his parents in ‘sweet’ home Alabama. Both young men abandoned in their own way, find themselves in the company of one another on the beautiful Canadian island. Regardless of it’s beauty a pair of high school brats become intrusive on the boys’ growing relationship.

Honestly, I don’t understand how or who gave this so-called movie such a high rating, I only can think that it was given by someone involved making it. And even so, I think it could be a bit objective, instead of promoting it without any real reason.

It is just a terrible movie, too slow, bad acting (if you can call it that), too long, and very amateurish, not to mention the inept editing. And let’s not forget that repetitive and boring piano score played over and over and over, besides the unacceptable sound throughout the whole film, that sometimes it was just impossible to hear the dialogue, and then at the next minute, it was just too loud.

I am gay and have the tendency to be a lot in favor of most gay-themed movies (meaning I am usually not to severe to give them not a favorable review), but sometimes I just cannot help it and be up front and be as objective as I can, and this is one of those times.

It is very disappointing to see that there are not that many good gay-themed movies made in the USA in the last few years.

I do recognize the effort of some movie makers (including the ones that make this one) about showing gay people just like any other human being, but it would be refreshing to see some good scripts, good actors, editing, etc. 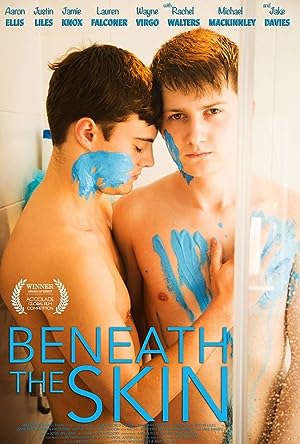 Beneath the Skin (2015)
87 min|Drama, Romance|N/A
4.1Rating: 4.1 / 10 from 197 users
After his family falls apart Joshua is forced to move to Canada to live with his estranged father. It is there he meets Jay, a local tattoo artist. The two becomes closer despite the negativity that surrounds them.
Director: Aaron Ellis, Michael MacKinnley
Creator: Aaron Ellis
Actors: Aaron Ellis, Hunter Page, Jamie Knox, Wayne Virgo