Max is gay and as such is sent to Dachau concentration camp under the Nazi regime. He tries to deny he is gay and gets a yellow label (the one for Jews) instead of pink (the one for gays). In camp he falls in love with his fellow prisoner Horst, who wears his pink label with pride.

What can I possibly say about this movie that would not bring me to tears. This movie was very powerful and thought provoking. I just could not understand the hatred for human beings, just because of what religion, sexual orientation, or whether they had a big nose. I just can’t for the life of me figured that out. I guess I will never figure it out.

There were some very strong scenes in this movie that tugged at my heart. The ridiculous killing of men and women for no apparent reason other than what I said above. The never ending work the prisoners did was just unspeakable. The conditions, and also the ever popular “no touching each other”. The latter is the most difficult to endure for two gay men captured and put to work in the concentration camps. In one powerful scene, that I have to admit I watched over and over about five times, during one of Max and Horst’s (main stars) rock moving extravaganza’s, they are allowed a three minute rest period while working a twelve hour shift. They are not allowed to look at each other, they must stand up straight looking ahead (some rest period huh). Well without giving away the scene. They have what we would call very graphic and arousing phone sex. And I have to tell you, I was right there with them. This scene really brought these two prisoners much closer together and very much in love. It was beautiful.

I have a couple of things that bothered me in this movie. I really hated the way the SS men spoke to the prisoners. I mean, one word sentences like “You” – “Walk” – “Friend?” – or “Watching You”. I mean for a people who claimed to be the superior race, these guys were not intelligent at all. Also the fake train outtakes that were obviously superimposed into the movie. The scenes themselves were in black and white which told the audience that they were not from the original film, but from some other movie.

Overall, this movie was profoundly incredible. It is a must see for everyone, no matter what the content of the movie – gays, murder, sex, SS men, Hitler’s BS , concentration camps. You have to watch this movie with an open heart and mind to actually feel for these people, not just because they were two gay men in love and pain, because they were human beings first and foremost. 7.5 out **********. See it, you will not be disappointed. 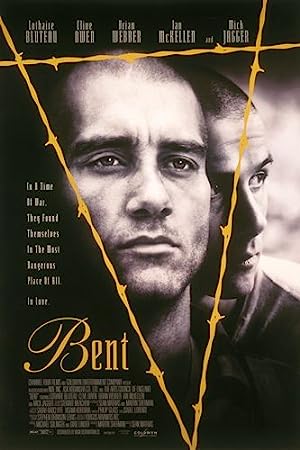 Bent (1997)
105 min|Drama, History, Romance, War|26 Nov 1997
7.3Rating: 7.3 / 10 from 7,186 users
Max is gay and as such is sent to Dachau concentration camp under the Nazi regime. He tries to deny he is gay, and gets a yellow label (the one for Jews) instead of pink (the one for gays)….
Director: Sean Mathias
Creator: Martin Sherman (screenplay), Martin Sherman (play)
Actors: Mick Jagger, Clive Owen, Brian Webber, Nikolaj Coster-Waldau

Be the first to review “Bent 1997” Cancel reply