An anthology film crafted from three stories from The Bible: First story is, of course, Adam & Eve. A nude Adam (Bo White) crawls and swims through odd rock formations (I suppose to simulate the birth canal) and eventually ends up on a beach. Eve eventually emerges from the sea and the two have sex. Next is the story of Bathsheba (Georgina Spelvin) and Uriah. Bathsheba, feeling ignored by her husband Uriah (Robert Benes) seeks the company of peeping tom David (John Horn). And last, Samson and Delilah: When Samson (Brahm van Zetten) murders one of Delilah’s (Gloria Grant) dwarf friends, she vows revenge.

Wakefield Poole’s “Bible!” is a feast for the eyes….and almost defies description. It consists of three visual interpretations of the Old Testament followed by a visual coda signifying the coming of the New Testament with a strange representation of the Annunciation. The film plays much like a musical composition as it contains no dialog. The first sequence depicting the creation of Adam is stunning in its exquisite beauty and quite probably the best depiction you will ever see of the creation of man theme on film. It eclipses even the more literal version in the big budget epic John Huston film. Unfortunately it is marred by the apple joke at the end, which serves to introduce the next and weakest sequence “Bath-Sheba” which plays in a slapstick comic vein reminiscent of silent films. The third major sequence of Samson and Delilah has a dark, sinister feel to it and has an eerie nightmarish quality of menace similar to the classic German expressionist style. “Bible!” is an interesting curio of its time, the fact of its experimental quality and frequent full frontal nudity prevented it from becoming mainstream. Like European films of the late 60’s and early 70’s this film was far ahead of the curve for the average American moviegoer. It has its flaws but purely from a visual standpoint it rewards the patient viewer. 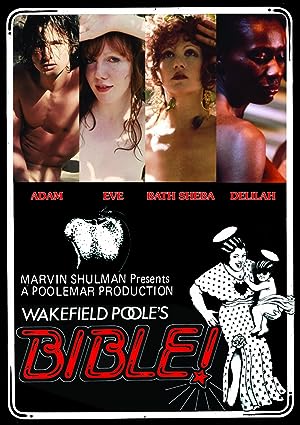