In this passionate modern day retelling of the classic novel, Emmaline Robinson and Dean McMullen are on two opposing sides of their high school world. But when they are caught in a storm at sea during a Caribbean field trip and stranded on a tropical island, these two teenagers will have to come together in ways they never imagined. Without parents, without cell phones and without help, they will learn how to survive on their own or face the ultimate consequences. As they explore and learn about each other, they also learn about themselves while falling in love, while waiting for rescue on the island.

I like castaway stories. I like BL: TA, although it is not as good as The Blue Lagoon (1980), and definitely not a masterpiece like Cast Away (2000, with Tom Hanks). In my view, the BL: TA has the following shortcomings: 1) The scenes with the parents searching their kids are too long. 2) What do they eat in the island? We see a bit but not enough. 3) The castaways should have lost weight, burned by the sun, get long hair / beards, etc. xe2x80x93 as in Cast Away (2000). Or we should see a scene in which the castaways find one or more boxes with useful artifacts like matches, scissors, cutlery, solar cream etc. (in the 1980 version they get stranded with various things xe2x80x93 no solar cream of course, since that story is placed around 1900). 4) The film should have some nude scenes as in the 1980 version. 5) They become castaways in a very unrealistic way. There is no island like this near Trinidad, and if there were one, castaways would probably be rescued within a few days (Moreover, such a small island cannot have a black panther or a waterfall). If someone had asked me to rewrite the script, I would have advised to start the film at an airport, where the two star-actors enter a plane as passengers. They don’t know each other but the girl notices the boy as a “snob”. The plane crashes in the Pacific (as in Cast Away). On their island, the teenagers tell each other about themselves and their relatives, with scenes as in the film, but shown in retrospect. The castaways find out that they are very different, so that they do not fall in love at once. Nonetheless, BL: TA has various enjoyable scenes. I like to see how the teenagers slowly fall in love during their exile. The scenes after homecoming are interesting as well. In Cast Away those scenes are very different xe2x80x93 in that film the main personality cannot re-discover his destiny xe2x80x93 but I like the scenes in BL: TA as well. The girl seems to be no longer in love with the boy xe2x80x93 quite understandable. 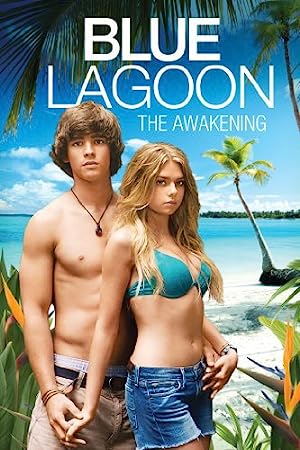 Blue Lagoon: The Awakening (2012)
85 min|Drama, Romance|16 Jun 2012
5.5Rating: 5.5 / 10 from 13,005 users
Two high school students become stranded on a tropical island and must rely on each other for survival. They learn more about themselves and each other while falling in love.
Director: Mikael Salomon
Creator: Henry De Vere Stacpoole (based on the novel by), Matt Heller (teleplay by), Heather Rutman (teleplay by)
Actors: Indiana Evans, Brenton Thwaites, Denise Richards, Patrick St. Esprit

Be the first to review “Blue Lagoon: The Awakening 2012” Cancel reply