Judith, an uptight divorcee, is appalled when her daughter Lily quits law school to move into a commune of hippie-misfits who live according to the behavioural principles of the bonobo monkey, a species famous for its ‘make love not war’ philosophy. Anita, the eccentric group leader, claims that she can resolve the conflict between mother & daughter if Judith will spend a day among the commune and submit to its principles. But with mother and daughter both hell-bent on proving each other wrong, Anita’s methods must now be put to the test as never before.

Yes, the premise is a good one; and it is a rare film that passes the Bechdel test with such flying colours, having women in both lead parts (and over forty to boot). It also has commendable themes – redemption/middle age/self discovery – which are not obvious topics for a comic treatment, yet are treated here with sensitivity. I came to this having seen Knott’s ‘On this island’ on Channel 4 a few weeks earlier, which also had a serious point, but the delivery of that message was much more obviously comic. Bonobo is not just a laugh-a-minute film, and there are passages where the darker side takes over; but the dialogue is snappy there is a feel good energy throughout. This was an impressive cast and the acting was subtly nuanced. I had only seen Josie Lawrence and Tessa Peake-Jones playing it for laughs before, but I enjoyed the greater range they were able to show here; and their performances took the honours. Overall, an enjoyable and thought-provoking movie. And, judging by the audience’s reaction during the showing, not just for me. 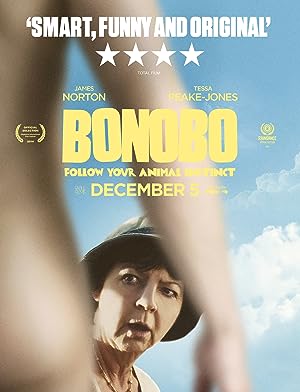