A poet sells his collection of comic books and action figures in order to afford to hire a male stripper on New Years Eve.

Regardless of its faults, I’m rating this movie at the top wherever I can. It’s not a coming-out film; it’s an affirmation film. It’s not about an abyss; it’s a joyful release. It’s one of the most beautiful films I’ve ever seen.

What you get in an hour-and-a-half is a lovely cast playing likable characters, heart-opening music, unusual settings, poetry, fish, food, fireworks.

Sure, there are faults here. The acting seems unrehearsed at times. We don’t get much depth on the background of the characters. So this is a slice-of-life, an observation, a short love story, and you, viewer, get to fill in the blanks, because the film is not going to tell you. The sex is honest and tasteful and truly breathtaking. “Boy” is exactly what queer cinema needs sometimes: an unconventional, cleansing experience of awakening and renewal. Happy New Year, indeed. 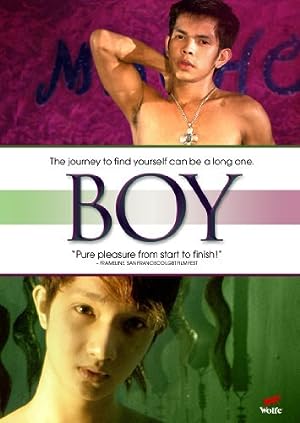