A young man is released from prison after many years and given a new identity in a new town. Aided by a supervisor who becomes like a father to him he finds a job and friends and hesitantly starts a relationship with a compassionate girl. But the secret of the heinous crime he committed as a boy weighs down on him, and he learns that it is not so easy to escape your past.

he Christian author Lewis B. Smedes once said that, “to forgive is to set a prisoner free and discover that the prisoner was you.” John Crowley’s Boy A is a powerfully gripping film about what happens when we fail to forgive ourselves for wrongdoing and give society the opening to move in and assuage our guilt. Jack Burridge (Andrew Garfield) has been released from prison after serving fourteen years for a murder that he helped commit when he was ten years old, but the struggle to recover his life has just begun.

Adapted by Mark O’Rowe from the novel by Jonathan Trigell, the story is a reminder of the notorious 1993 Jamie Bulger case when two ten-year-olds were convicted of murdering Jamie Bulger, aged two, although Trigell says that his inspiration for the book was a friend of his who served prison time as a juvenile and turned into “a lovely lad.” In the Bulger case, the British media portrayed the two boys as evil savages, ignoring circumstances that might have compelled them to commit the act. Sadly, Jack’s release is also trumpeted in the media with a scare headline about “evil coming of age” and a drawing of how he might look today.

Known at their trial only as Boy A and Boy B, both Jack (whose given name was Eric Wilson) and his friend Phillip (Taylor Doherty) were incarcerated for the brutal murder of a young female classmate, yet the full details of the crime including what may or may not have been Jack’s role are never fully explained and the surrounding circumstances revealed only in sporadic flashbacks. We learn that both boys had a childhood of poverty and neglect. Eric had an alcoholic father and a mother stricken with cancer and Philip was sexually abused by an older brother, yet Crowley never uses their circumstances to justify their crime.

The film opens with Jack being assisted by his counselor, his uncle Terry (Peter Mullan), on his release from prison. Terry gives him a present of a pair of “Escape” brand sneakers and helps him to find a new job at a delivery service and obtain living accommodations with Kelly (Siobhan Finneran), a kindly woman who agrees to house him temporarily. As a cover, he tells his new boss and co-worker Chris (Shaun Evans) that he did three stints in prison for stealing cars when he was much younger. Jack makes a positive adjustment at work and falls for office secretary Michelle (Katie Lyons), known affectionately by her mates as ‘The White Whale”. Their relationship at first is awkward, especially when Jack is given Ecstasy at an office party and lets loose in a wild, spasmodic dance, and later, engages in a violent brawl while coming to the aid of a friend.

Slowly Jack and Michelle find much in common and one of the loveliest scenes in the film is when they snap photos of each others while taking a bath together. As Jack begins to get his life together, he remains fully aware of the need to guard his secret and his anxiety that others will discover it is always evident. All the while, Jack is supported by Terry, and when the boy rescues the victim of a car accident to become a local hero, Terry calls him his “most successful achievement.” Things get complicated, however, when Terry’s estranged son (James Young) comes to live with him and begins to show resentment about his father’s closeness to Jack. Eventually this entanglement will be the trigger for the realization of Jack’s (and our) deepest fears.

Boy A is a compassionate and disturbing film that won numerous BAFTA awards for acting, directing, editing, and cinematography, though it started out as a made for TV movie. As Jack, Andrew Garfield turns in a superb performance, allowing his face to reveal his vulnerability and his changing moods to reveal the tightrope on which he is walking. Though the film has moments of pathos, it is not without grace. We cling tenaciously to those moments of transcendence, sensing that they might be fleeting, but knowing that they will never be forgotten. 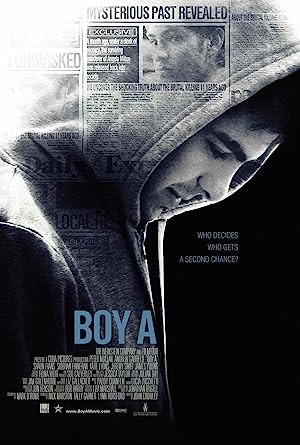