It’s Halloween 1997 – the last night of high school for Corey, Jango and their skater gang, The Gromits. Childhood is over and adult life beckons. But for Corey, his past has some unfinished business. When he encounters Jonah, a former childhood friend but now victimized by Jango’s cruel streak, Corey takes pity on him and agrees to walk him home for old time’s sake. What starts off as a normal walk through empty suburban streets descends into something darker and magical as they tell each other ghost stories, drawing upon their fears of the world around them. As they walk through their memories and ghosts of the past, Corey is surprised to discover how much he still has in common with his abandoned friend. But on the night of the grave’s delight, even the most buried truths will find a way of coming to life.

It’s a rare movie that makes you feel as though it was created just for you – but Boys In The trees hits the mark so perfectly on what it was like to be a teen in the Australian 90s that my level of empathy for the characters was off the charts.

The soundtrack is incredible, the cinematography is pure and the young Aussie leads have taken hold of the ambitious script with both hands and delivered performances that are nothing short of star-making. Toby Wallace as Corey and Mitzi Ruhlmann as Romany are particularly strong. Justin Holborow as the bully Jango also plays his part with true grit.

This is the evolution of the traditional coming of age tale, with the Writer/Director Nicholas Verso creating such an ethereal landscape you feel moments of ‘What Dreams May Come’ style fantasy seamlessly anchored by the exquisitely curated 90s Adelaide suburbia.

I absolutely adored this movie. Anyone who loves fantasy will adore it. It’s a must-see for everyone who loves movies that straddle the line between fantasy and reality. 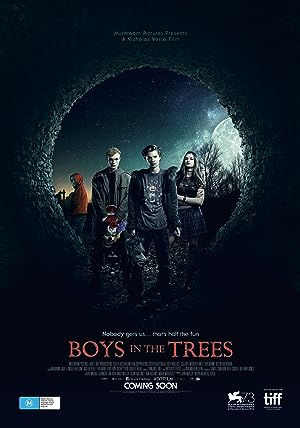