Based on Tim Winton’s award-winning and international bestselling novel set in mid-70s coastal Australia. Two teenage boys, hungry for discovery, form an unlikely friendship with a mysterious older adventurer who pushes them to take risks that will have a lasting and profound impact on their lives.

I read each new Tim Winton book as they come out. He’s one of Australia’s best writers and his work is certainly the most authentic Australiana. So, even though I’ve admired Simon Baker’s work for many years, I worried that the film would be hard-pressed to match the quality of the written story. The anxiety was wasted; Breath the movie is a superb rendering of the book, managing to capture the moods, emotions, fears love and the allure of surfing in an understated and intimate way, even while omitting sections of the book, which was a complex 215 pages, and redirecting the thrust of the novel. At almost two hours, it’s paced in a tempo that matches the period, the people and the lifestyle and flows past like the beautiful waves at Barney’s. The young actors are brilliant but congratulations to all concerned because so is the film. 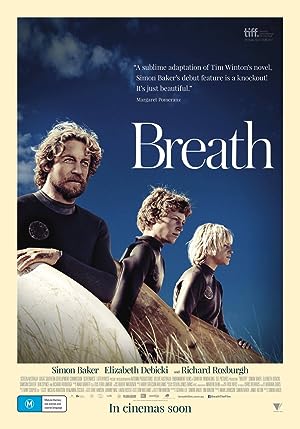 Be the first to review “Breath 2017” Cancel reply