Brother and Sister 2016 with English Subtitles

Neukölln, a trendy district in Berlin. Living space is scarce here. Without surety, proof of credit worthiness and salary there is no chance at all now. Thies knows this game; he works for a real estate management company and watches that the rules are upheld – until he meets Bruno and Sonja. He provides the dissimilar siblings with a flat free of charge on the quiet. And enters into an affair with the brother. Step by step he becomes more deeply immersed in the secret of the “siblings”. A Berlin film about a loner who gets caught up. About a couple with unclear residency status. About a city everyone wants to live in.

Jan Krüger’s fourth feature film is about the relationships we choose for ourselves set against the backdrop of a housing crisis and the immigration problem. Neukölln is a trendy district in Berlin and living space is scarce here. Without surety, proof of outstanding credit and salary there is no chance to live there. Thies (Vladimir Burlakov) knows this game since he works for a real estate management company and watches that the rules are upheld but then he meets Bruno (Julius Nitschkoff) and Sonja (Irina Potapenko). He finds a place for the siblings flat free of charge. He then begins an affair with Bruno, Sonja’s brother. Little by little, he becomes more deeply involved in the brother and sister’s secret of the two.
Thies is soon part of the lives of the siblings and what they experience is the main focus of the film. Bruno and Sonja are perhaps not telling the whole truth and the time will come when a choice will have to be made between “family” ties and emotional ties.

The film is based on the fairytale “Little Brother and Little Sister” by the Brothers Grimm. It deals with the themes of immigration and freedom in an inhospitable urban environment with tenderness and sophistication. Quite basically, this is the story of a loner who gets caught up with a couple with unclear residency status and a city everyone wants to live in.

Bruno and Sonja are foreign immigrants from the East with no family but each other and have little chance of their application for housing getting to the top of the pile. Thies tolerates the system without supporting it either. He moves into action because he is attracted to Bruno so he takes care of things to put the brother and sister up in an empty apartment. When the two men enter into a relationship with one another, the solitary and predictable ending becomes very real. 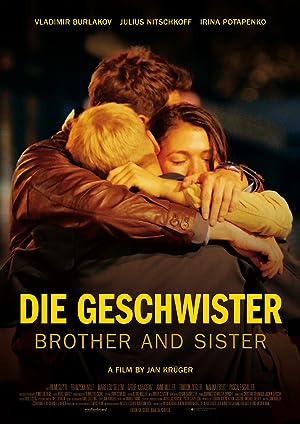