Flemish greater Brussels grocer Bert transferred his true passion, aiming for the national football (soccer) team, missed due to a knee injury, to his eager son Gilles (12), whom he coaches tirelessly. Excessive anger at the referee during the match when a scout may select Gilles for the provincial team, a crucial step, proves fatal for Bert’s heart. Gilles is frustrated that both the grocery shop and his mother gradually are taken over by football-ignorant accountant Joris and imagines still being coached by father. His own foot injury will either delay his ambition at a crucial or may end it altogether if not treated properly.

Buitenspel is a movie about a 12 year old boy who is ambitious to become a Red Devil for the national soccer team of Belgium. After his father, played by Filip Peeters, dies of a heart attack Gilles gets to deal with a lot of emotions in his “new” life: mourning the loss of his father who happened to be his biggest fan and best friend, having to deal with his mother’s new partner,… Also Gilles’ soccer future gets threatened by a serious foot injury which causes him to having to make a very important decision.

Being a soccer fanatic in school at the same age as the main character I found this picture touching. The acting was great, especially from Joke Devynck and Filip Peeters, and I thought the camera work was pretty good too considering we’re talking Belgian film making here.

On the overall I think Jan Verheyen did a pretty good job with this movie. Still Team Spirit en Alles moet weg had that special ingredient this one was missing. In my opinion the story could have been worked out a lot better by using other characters in an understory and I also felt the acting by Ilya Van Malderghem wasn’t too satisfying. Sometimes I could just see where a scene was going from the beginning on. I’m not saying I could forecast the ending of the movie because I was expecting to see Gilles turning out to be a “Rode Duivel -15”, but there were lots of times where I could have just get a drink without having to pause the film. It was often predictable is what I’m saying… The main character Gilles was played by someone who had no experience at all in movie acting. Maybe Jan Verheyen should have picked a kid that had already been there and wasn’t so good at soccer instead. There were a couple of scenes where you could really see that Ilya isn’t much of a performer in regard to expressing emotions, f.e. the scene where his mother (Devynck) reminds him his father is dead because of all the psychotic experiences he’s having. Also his mother calls him “venteke” which is an Antwerp dialect for “my little guy” for about 563 times in the movie which got a little on my nerves.

Nevertheless there were a lot of aspects I loved about this movie: the story is very likable, the music is fulfilling and I also enjoyed watching Filip Peeters on the screen. Any movie with him would have to be ridiculously catastrophic to be rated under 5 by me. This is a movie worth watching whether you live in Belgium or anywhere else. Emotion is guaranteed! 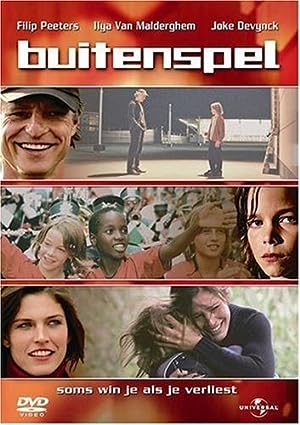 3 reviews for Buitenspel 2005 with English Subtitles