Paul is a German soldier who goes AWOL when the truck he is riding in stops at a fast food restaurant. He then returns home to where his older brother Max lives. Paul is immediately attracted to Max’s girlfriend, Lene, and tries to entice her into a sexual relationship, but she refuses. Paul is shown to be angry and frequently loses his temper at those around him, including his brother, his old friend, and his ex-girlfriend. Meanwhile, the military begins to look for him.

Bungalow definetely is one of the best German films I’ve ever seen, maybe even the best. But it is also a love-or-hate movie. I loved it for personal reasons and if you can’t identify with one of the characters, you’ll probably ask yourself what the director intended to show the audience or you’ll simply find ‘Bungalow’ boring. For me, it wasn’t. It felt like a longer version of Marcus Weiler’s short ‘Always crashing in the same car’, a German version of Larry Clark’s study of aimlessness and loneliless in ‘Ken Park’ or even a German version of Richard Kelly’s masterpiece ‘Donnie Darko’ reduced to that feeling of being somehow lost, without a direction to follow that seems right.

The acting is brilliant and the (non-)dialogues are brilliant. If you are German and born in the 80s, maybe you’ll love this movie. I was impressed. 10 out of 10. 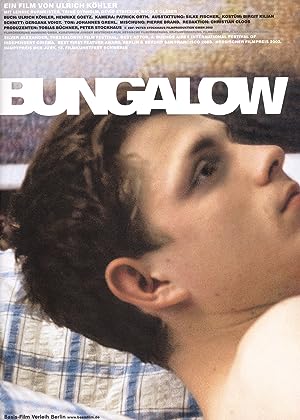 3 reviews for Bungalow 2002 with English Subtitles