Fictionalized biopic of famed 17th century Italian painter Michelangelo Merisi de Caravaggio. As a young man, he gained the support of Cardinal Del Monte and Caravaggio proceeded to develop a new style of painting giving a more realistic view of the world in which he lived. He also begins love affairs with one of his models, Ranuccio as well as with Ranuccio’s girlfriend Lena. Their relationship leads to murder and deceit.

This beautiful visionary art film based on the director’s take of the life of Caravaggio was worth the almost 7 years it took to make it. Derek Jarman had the brilliant sense to use Nigel Terry and Sean Bean as the lovers in this meditation on sexuality, criminality and art. This film is more of a fictionalization on Caravaggio using the artist’s works as a way to pursue the story of the artist. It is beautiful, as are the actors and actresses, and Sean Bean is a revelation in this very early role, as he plays Ranucio, the love interest of Caravaggio. When he is on screen he steals the movie, as his animal magnetism, sexual energy, and wild persona grip the film and propel the story forward. This is an adult film with homosexual themes and might not be for everyone, but if one is adult and has a sense of taste, and loves art movies, this is a 10 out of 10. 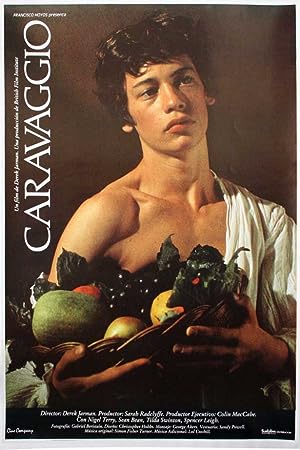 Be the first to review “Caravaggio 1986” Cancel reply