This is the story of a twelve-year-old named Maddy. Maddy and her adventurous father have always shared a love for mountain climbing. Their hobby, however, has a disastrous effect when a devastating accident on Mount Everest injures his spine, paralyzing him forever–unless he gets a very expensive operation. Determined to procure the money to pay for his surgery, Maddy decides to recruit two of her friends, a computer genius and a mechanical whiz kid, to help her pull off a risky heist. They plan to break into the local super-high-tech bank, which holds a vault suspended 100 feet off the floor, and get to its safe. To complicate matters even further, Maddy’s mother works as the security chief at that very bank. Regardless of what obstacles she faces, Maddy is determined to get to the funds her father needs, by using the amazing climbing skills he taught her.

Catch That Kid, an enjoyable movie for the whole family? I think so. The story is about a young girl named Maddy, a tomboy who loves climbing. Her parents, however, have forbidden her to climb due to an accident her father had had which seriously injured his back. Though he had apparently recovered, something goes wrong which leaves him paralyzed from the neck down. Maddy’s mother Molly does everything she can to find the money needed – $250,000 – for an opperation to save him. But there is nothing she can do. Maddy, still determined to save her dad, sees robbing the bank at which her mother is setting up a security system as her only option. She quickly enlists the help of her two best friends – Gus, a go-cart mechanic and Austin, a computer geek – who both happen to be in puppy love with her. What ensues as they make their plan to rob the bank and begin to carry it out is funny, incredibly unrealistic, and touching.

Most of the humor comes from the two boys’ crush on Maddy, the wannabe actor who works at the bank, and later the fact that Maddy is left in charge of her little brother at the last minute and decides to take him with her to the robbery. I would have liked to see more humor, and the slapstick comedy from the security officer was not very funny. Nevertheless, the movie overall was fun.

The movie is unrealistic, but I like it that way, because in reality life is complicated and hard, but in movies everything is possible. I also enjoyed the hi-tech security measures employed at the bank, very nifty.

The touching scenes come in where Maddy shows her deep love for her father and learns how very deep her mother’s love is for her.

The movie did not, however, teach any real moral values. That is, of course, easily remedied by talking to your children about right and wrong and the real consequences of choosing actions you know are wrong.

I recommend this movie as a fun movie for the whole family to see together, if only because the kids will definitely love it, but I think the adults will enjoy it too. 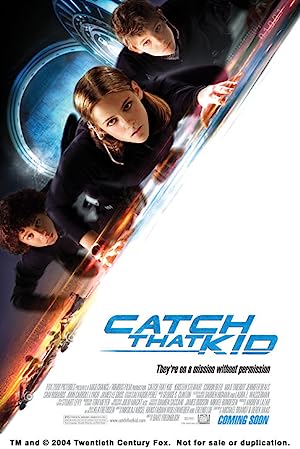 Be the first to review “Catch That Kid 2004” Cancel reply