Cinematographer Henning Kristiansen took over here entirely instruction after cooperating with Morten Arnfred on “Me and Charly”. obvious sequel “Charly & Steffen” is just the obvious sequel to success ungdsomfilmen from the year before, but unfortunately all the authenticity gone out of favor of the entirely smooth routine. Efter at have vinket efter Charlys knallert på landevejen har Steffen ikke set sin gamle kammerat, men nu støder de to igen ind i hinanden i Århus. Here struggling Steffen to find itself between not particularly sympathetic adults, and the meeting with the funny Charly may give life a much needed oomph. There are far between intense scenes, if they come at all, “Charly & Steffen” exudes we make a 2 and not really of much else. Add to that a series of very lengthy song scenes where Lone Kellerman unfolds in everyday Danish “show”, or Allan Olsen with brown head and white gloves mimes to the known background music in what feels like a neighborhood. The “cute” love affair between Steffen and Jannie is at best awkward, like adults, with Ghita Nørby and Jesper Christensen as flagships, at no time shall a credible script page to serve a reply from.Final drama with “rockers” on the field with cross cutting for a protracted theater number brings nothing but more confusion. (google translated) 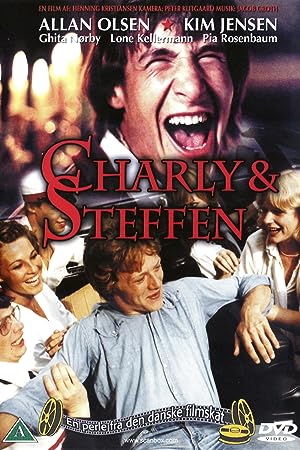