While other kids buy into countless hours of studying just so they can get a mark in some teacher’s report book, Handsome Davis sees it as nothing more than a system of control over your mind. That’s why Handsome and his three best friends Sammy, Victor and the cribsheet genius Applebee have banded together and found ways to cheat on their tests all through their school years. Everything had been going along smoothly until the gang entered their final year of high school and the stakes were upped by the school’s principal, Mrs. Stark. If they get caught cheating again Stark will make a note in their permanent records and possibly kill their chances of getting into college. But can Handsome convince his pals to pull off one last, great cheat with him and outsmarting Stark and the system, even if it means possibly destroying their friendships?

This a brilliant little flick that I would recommend to anyone who has schemed his way through higher education. The movie has great performances from Joey Lawrence’s brother and Handsom Davis, as they pull tricks and make crib cheats to get to the top. The end is epic and some of the quotes are just plain brilliance.

Definitely one of the better flicks I have seen about high school. 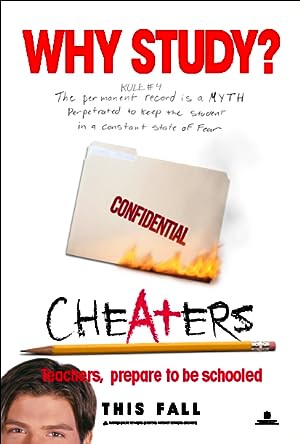 Be the first to review “Cheats 2002” Cancel reply