Close-Knit 2017 with English Subtitles on DVD

One spring Hiromi, who is the mother of an 11-year-old girl Tomo, left home for the umpteenth time. Tomo is accustomed to such a mother and as always went to Makio’s place. He is a brother of Hiromi and has lived with Rinko, a pretty girlfriend. Actually, Rinko is a transwoman. She works as a caregiver in a nursing home where Makio’s mother Sayuri who suffers from dementia is living. Rinko makes a delicious meal and sometimes cuddles Tomo. She is a little confused, but Tomo, Rinko and Makio start to live a life together. One day Rinko teaches Tomo to knit to control her temper. Rinko was also taught by her mother at the age of puberty when she struggled with her sexuality. A daughter neglected by her mother. A gentle uncle and his transgender lover. An angsty boy who recognizes a sense of himself as a gay – A warm “knitting” reorganizes unconventional family.

I really enjoyed this movie, not only because the main character is portrayed by my favorite Japanese actor, Toma Ikuta. The story is very deep and beautifully told, much more substantial to most Japanese dramas I have seen so far.

Ikuta’s performance is excellent and it was a nice change to the usual characters he plays, it must have been challenging and probably out of his comfort zone, yet it was done beautifully. Rin Kakihara, who plays Tomo, has also showed an excellent performance and has a lot of potential for a young actress.

Definitely recommend this movie as a change of pace and a reflective piece. 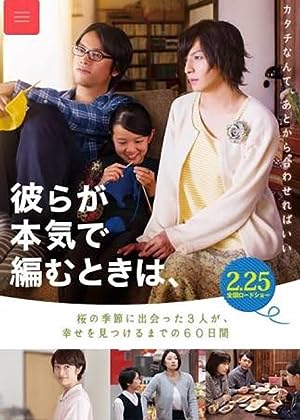 Close-Knit (2017)
127 min|Drama|25 Feb 2017
7.0Rating: 7.0 / 10 from 1,071 users
One spring Hiromi, who is the mother of an 11-year-old girl Tomo, left home for the umpteenth time. Tomo is accustomed to such a mother and as always went to Makio's place. He is a brother …
Director: Naoko Ogigami
Creator: Naoko Ogigami (screenplay)
Actors: Mugi Kadowaki, Txc3xb4ma Ikuta, Kenta Kiritani, Eiko Koike