Four stories about love and self-acceptance: An eleven year-old boy struggles to keep secret the attraction he feels towards his male cousin. Two former childhood friends reunite and start a relationship that gets complicated due to one of them’s fear of getting caught. A gay long lasting relationship is in jeopardy when a third man comes along. An old family man is obsessed with a young male prostitute and tries to raise the money to afford the experience.

We are treated to four different yet interwoven stories; the common denominator being that they deal with being gay and gay relationships.

In one story we meet an elderly closeted gay poet, Joaquín (Alonso Echánove); he is married, with a seemingly happy wife and daughters. He is smitten by a young male prostitute, Gilberto (Alejandro Belmonte) he meets in a bath-house.

In a second story we get an example of a long-term (ten year) gay relationship that is starting to fall apart. Unfaithful Hugo (Antonio Velásquez) is involved in an affair with another man. His sensitive partner, Andrés (Alejandro de la Madrid) is trying his best to save their relationship.

The relationship between two young gay men is put under pressure in a third story; Leo (Gustavo Egelhaaf) is closeted and scared to reveal his sexual orientation, whilst Fito (César Ramos) does not want to remain in the closet any longer. This leads to tension.

In the fourth story a clearly gay boy, Mauricio (Gabriel Santoyo) develops a crush on his older cousin, Oliver (Sebastián Rivera). Mauricio desperately wants to get closer to Oliver, but it is a risky move; what if Oliver is straight and homophobic?

The director, Sergio Tovar Velarde, effectively highlights some of the issues faced by gays: Social pressure resulting in fear and closeted lifestyles, a swinging lifestyle and promiscuity, and how hard it is to make a long-term relationship work. Furthermore, it shows us how a homophobic and intolerant society, fueled by the church, can result in bullying and assault.

I found the acting splendid, and so too the cinematography and soundtrack, and score ‘Cuatro Lunas’ an excellent 8/10. 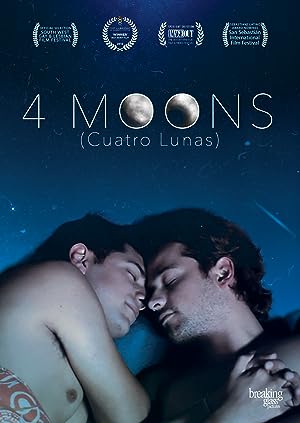