After months of being alone, sad, busy, sidetracked, free, lofty, late and away from his kids, Lenny, 34 with graying frazzled hair, picks his kids up from school. Every year he spends a couple of weeks with his sons Sage, 9, and Frey, 7. Lenny juggles his kids and everything else all within a midtown studio apartment in New York City. He ultimately faces the choice of being their father or their friend all with the idea that these two weeks must last 6 months. In these two weeks, a trip upstate, visitors from strange lands, a mother, a girlfriend, “magic” blankets, and complete lawlessness seem to take over their lives. The film is a swan song to excuses and responsibilities; to fatherhood and self-created experiences, and to what it’s like to be truly torn between being a child and being an adult.

For those who can put up with its (largely intentional) jumpy hand-held 16 mm. look, Daddy Longlegs is a heck of a stimulating and complex piece of work. It’s autobiographical, yet collaborative and imaginative. It’s improvisational, yet very well planned. It’s appalling, yet also appealing — a film that sticks in the craw but also lingers in the mind and the heart. It signals the arrival of yet another team of film-making brothers whom we need to watch.

On the face of it, this is the story of a criminally irresponsible divorced dad who gets to spend two weeks out of a year with his two boys, aged around seven and nine. Lenny (Ronald Bronstein) is young and childlike himself, thin, agile, athletic, but graying, terminally unconventional, a hipster, unstable, a film projectionist, a man whose life he has no firm grip on, but determined to love his kids and make his time with them as memorable as possible. When he picks up the boys, he immediately launches into dangerous play, walking on his hands across the street with them. Sage (Sage Ranaldo) and Frey (Frey Ranaldo) alternate between being delighted, excited, and scared to death by Lenny’s games.

He has a one-night stand, and then the next day forces himself, with the boys, on the woman and her boyfriend when the latter drives upstate for the weekend. (The story otherwise takes place very much in a Manhattan whose wild grunginess and seemingly greater-then-normal tolerance for irresponsible behavior suggest the New York of the 1970’s.) He takes the boys to play squash (a rough game for two pipsqueaks). He gets mugged by a peddler-thug (played by Abel Ferrara) coming home by himself with groceries and ice cream cones, but never mentions the incident to the boys or anyone. He has a date with an on-and-off girlfriend. With her around in the morning, he gives the boys a pet lizard he hides as a prize in a cereal box.

At least one of the things he does is really awful. He unexpectedly pulls an all-nighter at his job, and, because he can’t find anybody to babysit with the boys, gives them crushed bits of adult sleeping pills. They go into a deep sleep and cannot be awakened. This lasts for several days; it could have lasted longer. A doctor friend who comes in explains this and says if he weren’t a friend, he’d report this to the police. The really creepy feeling this incident gives you lingers on. But it ends happily. The boys are fine. And that goes for the whole experience, though this does not make Lenny’s nightmare parenting techniques okay. The film is meant to arouse contradictory feelings and express the filmmakers’ own mixed emotions toward their real dad.

Watching Lenny is like witnessing a train wreck but Bronstein is very good at keeping you from hating him. So are Benny and Josh, filmmakers, of course, who made this out of their own childhoods with a wealth of conflicting emotion. Their artistry and luck pay off in how complex the feelings are that Daddy Longlegs evokes. The film (and the collaboration with Bronstein) are a triumphant combination of cool reason in the planning and warm emotion in the making. Having had two brothers in charge who have that contrast — one more logical, the other more romantic — also doubtless helps maintain the fertile balance.

Lenny is more like a hyper older brother than a father, but that can be a lot of fun for little boys — for a while anyway. Most of the year Sage and Frey are with their mother (played by the young actors’ real mother — wife of the lead guitarist of Sonic Youth), who, from what we see of her, provides a grownup and sensible environment.

But it’s to be noted that Josh and Benny Safdie made this movie, about this riskier side of their experience, to evoke their childhood. Happy families are all alike — the small, crazy part of your youth spent with a divorced parent may be more memorable and complex and stimulating to the art that goes into making films than the safe, grownup, responsible part that nurtured you and protected you and kept you sane. With divorced parents, you have two different worlds you move between; the “happy”-“unhappy” distinction may not apply. The distinction might better be “safe but a little bit boring” versus “unsafe but wild fun.”

The Safdies have made clear that Lenny is an original creation, based on their dad, but built up very much in collaboration with Ronald Bronstein, who, though to them he looked remarkably like a classic silent film actor, was not an actor at all but a filmmaker whom they met at Austin’s hip SXSW festival where they were all celebrated for their work. They sat down with Bronstein for days of talk in a diner where they hashed out all their ideas about their father and learned what Bronstein could internalize and what he rejected. Thus an improvisational collaboration grew. Bronstein worked constantly with the Ranaldo boys, always in character (a kooky new play dad) even when they were not shooting. Another element was the Safdies’ and their team’s guerrilla street film-making techniques used to incorporate non-actors along the way. “If Jean Vigo, John Cassavetes, Buster Keaton, Woody Allen and Charlie Chaplin had a deformed child, we would be their best friend,” the brothers told Interview magazine recently. This is a richer and more deeply thought-through mix than we usually get from Cassavetes’ youthful Mumblecore offspring, a more intense mining of memory and experience.

Interviews with Benny and Josh show a bright and happy pair of young men who finish each other’s sentences. It looks like they grew up just fine, their time with their real father having taught them to be alert and resourceful. Those dangerous, irresponsible weeks were a pebble that produced a pearl. 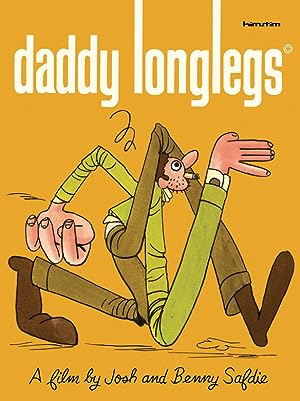 Daddy Longlegs (2009)
100 min|Comedy, Drama|28 Apr 2010
6.7Rating: 6.7 / 10 from 1,044 users
A father juggling his kids with the rest of his responsibilities is ultimately faced with the choice of being their father or their friend.
Director: Benny Safdie, Josh Safdie
Creator: Ronald Bronstein (with more from), Benny Safdie, Josh Safdie
Actors: Ronald Bronstein, Alex Greenblatt, Sage Ranaldo, Frey Ranaldo