While staying at a run-down cabin in the woods during the weekend, three children must save their parents from the neighbor who intends to feed them to her un-dead family.

Taking a relaxing trip to the woods, a young kid joining his best friends’ family on a camping vacation in the wilderness finds their next-door neighbor is keeping a cannibalistic secret with her and must find a way to force their parents to believe them in order to get away alive.

This here wasn’t all that bad of an effort. One of the more impressive elements present in this one is the fact that there’s quite a large amount of atmosphere built up here alongside the surprisingly funny comedy. The opening half, filled with looming shots of the woods at play here as well as creating a strong central air that grows progressively more intense the more this one unfolds as their discoveries in the woods and finally the first peak in the house makes for quite a strong set-up. Once they actually witness what’s going on in the cabin, where the deformed creature is feasting on the victim they’ve been spying on makes for a nice launch into the latter half where the zombified creature is loose and they must rely on each other to survive as the action there is quite fun. From the surprise visit to their house which features the great brawl being observed from the hiding spot that has to remain undiscovered to the chaos of the creature ambushing them in the house and being forced to deal with the shambling creature and the victim stashed away to the later confrontation back in their house with the transformed girlfriend, they give this the kind of big high-end action required to enjoy here. That all leads into the film’s biggest action scene with the final retaliation back at the cabin where this one really manages to score nicely with the outdoor confrontations with the zombies, the final brawling in the house where everyone tends to take a little damage and leading up to the gruesome resolution sequence that’s quite fitting considering the bloodshed unleashed. Given that the fun of all this is from the rather great comedy between the group, whipping off one- liners and insults against each other as well as engaging in some rather hilarious situations that make this feel far funnier than it really is, adding another nice layer to the film. While these here do make this one rather fun, there are a few minor issues to be had here. The main problem here is the fact that there’s some rather glaring pacing issues here that crop up from time-to-time, as the film takes way too long to get the family out to the cabin with it taking too much time showing them traveling in the car, stopping at the restaurant and antagonizing each other there, it all just really drags this one out and it takes awhile before they actually show up in the cabin. Even then it takes awhile for the true horror to be felt, and it’s somewhat stilted pacing is a minor problem. Likewise, there are also some minor issues with the low-budget nature showing up from time-to-time, as the low light levels and somewhat cheap- looking gore do get to this one at times and it’s rather obvious. However, these aren’t really distracting and it’s quite fun regardless. 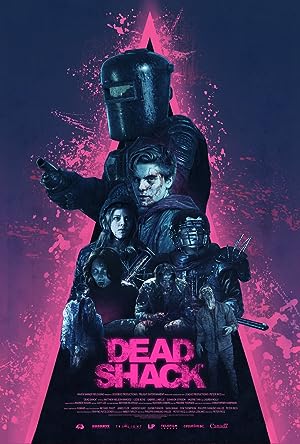 Dead Shack (2017)
85 min|Comedy, Horror|02 Jul 2017
5.5Rating: 5.5 / 10 from 1,574 users
While staying at a cabin in the woods during the weekend, three teenage kids discover their neighbor is 'feeding' guests to her zombie family. In short order, the battle is on as the kids fight to save themselves and their family.
Director: Peter Ricq
Creator: Phil Ivanusic, Davila LeBlanc, Peter Ricq
Actors: Matthew Nelson-Mahood, Lizzie Boys, Gabriel LaBelle, Lauren Holly

Be the first to review “Dead Shack 2017” Cancel reply