The summer of ’58, the year Sweden almost won the world championship in soccer over Brazil, Yngve Johansson accepts two children to live with him during the summer, as told through the eyes of a young boy. His name is Mårten, and the other child’s name is Annika. She is a rough girl, with many problems. The three of them do not get along, and Yngve is a true dictator to the children’s eyes. However, when the children discover that their new guardian has a crush on their teacher (Cecilia Nilsson), they do what they can to bring the two together. Soon enough, the three will discover that they have a lot more in common than they previously imagined, and together they can make their lives worth living again. This is a sweet story about life in Sweden in the mid 1900’s. It is about family, love, hate, innocent friendship that we all can relate to, and much, much more. The movie invites laughter as well as tears, and the actors, both the young and the old, are very talented and the best Sweden can offer. One will never forget the scene when Yngve believes the children enjoy speed bumps!

When I sat down to watch this movie I was rather depressed. “Den bästa sommaren” changed that.

Wonderful film about two orphans spending their summer holidays together in late 50s Swedish countryside. Their “father” for the summer is a seemingly square and restrained coroner, struggling for self-respect and gaining respect from others. With the 1958 soccer World Cup (which was held in Sweden) as a background, the three of them, and the kids’ teacher, find their lives changing – for the better.

Great acting, wonderful photo, good timing and a story that will make your day brighter too. 10/10. 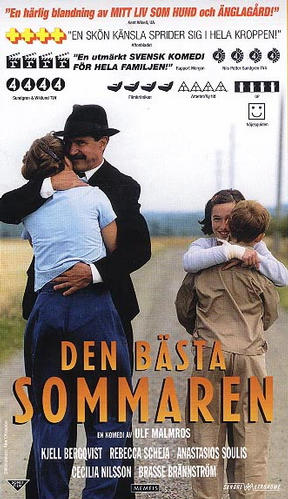