This is a German remake of the 1976 classic Bad News Bears, though rewritten to appeal to a more international audience. Bad News Bears is about minor league baseball, something very familiar within the American culture. Die Wilden Kerle is about a bunch of kids wanting to play a ball game, something very familiar just about anywhere on this planet.

The movie is in German, a language I had studied as a child but am rather rusty in now. But the cinematography and the acting were both excellent and completely made up for the fact that I understood at most 10% of the spoken language. It only proves that picture is worth a thousand words. And since a 96 minute movie contains more than eight million pictures…

I thoroughly enjoyed this movie. It made me feel young again. I have heard it is a big hit in Germany. I can see why! This movie definitely deserves to be seen all over the world. If you can get your hands on it, you will enjoy it, too. 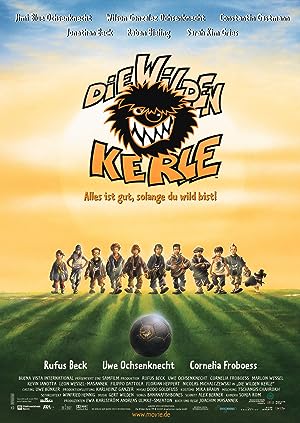 Die Wilden Kerle: Alles ist gut, solange du wild bist! (2003)
94 min|Family|02 Oct 2003
4.8Rating: 4.8 / 10 from 1,203 users
A home-made soccer team of kids have to get ready for a match against the team that has taken the kids' field to play and won't give it back unless they lose a match against the kids.
Director: Joachim Masannek
Creator: Joachim Masannek
Actors: Jimi Blue Ochsenknecht, Raban Bieling, Sarah Kim Gries, Constantin Gastmann