Emo kids Israel and Louie walk around their east Los Angeles neighborhood dishing about their high school classmates. After listening to Louie boast about his sexual escapades, Israel decides he has some catching up to do.

One could often see the Hispanic community as a group of outsiders, thus embodying the condition of the subaltern. But what happens when inside this outcast community, there is further marginalization? Brian Harris Krinsky’s short film focus on Israel, a young Hispanic boy, around 15 years old, who happens to be immersed in the era of virtual communication, text messaging and IM. He has but two deeply rooted obsessions: one is to be constantly “connected” via a smart phone, and the other is to take care of his hair. The first one gives him, as well as millions of people, the illusion of being indeed connected and communicated with the world. Nonetheless, this is but a simulacrum of real human rapport. The second one is actually a symptom. Symptoms are the manifestations of a profound psychological or social malaise.

Israel receives text messages all the time and that’s how he finds out who is sleeping with whom. We cannot fathom what kind of perpetual orgy he imagines, but when he meets Ricky, an 18 years old kid, he decides it’s time to lose his virginity. At the moment of truth, however, there is an excision. Israel is somewhat aware of the fissures in society’s structure, but he still confides in his instant messaging as the ‘end’ and not the ‘means’ of communication. Thus, deprived of his cell phone, interacting with Ricky will become difficult. There is also the symptom, Israel’s perfectionism regarding his hair. Sex is a sweaty and messy business, and it sure won’t do any good to his hairdo. What then? Will this truly be Israel’s first time or society’s malaise could come through once again as the symptom? 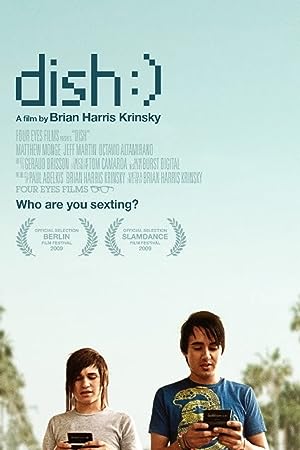 Be the first to review “Dish 2009” Cancel reply