An American family moves to Mexico to fabricate dolls, but their toy factory happens to be next to a Sanzian grave and the toys come into possession of an old, malicious spirit.

Think of it as the Mexican feminization of “Child’s Play”. This movie has an incredibly slow start, but is a good watch for fans of movies like the “Child’s Play” series, “Dolls”, the “Puppet Master” series, and any other movie where dolls can walk and talk. “Dolly Dearest” is your typical, satanically possessed inanimate object movie, containing such well-known actors like Candy Hutson (some of the “Land Before Time” movies), Chris DemetraI (“Somethimes They Come Back”) and Denise Crosby (“Pet Sematary”), and comedic favorite Rip Torn. Set against the beautiful background of Mexico, much of the plot of this movie was involved with an ancient black magic curse associated with a pre-Mayan civilization.

It takes nearly a half hour before the movie really starts to get juicy, but once it does, you can’t take your eyes off the screen for a second, or you miss something important. Dolly is a terrifying creature, with a tiny, tinny laugh that makes the viewer want to crack up. If you’re expecting intelligence and deep meaning to a film, this isn’t the horror film for you, but it’s an excellent slasher pic. It’s not too bad, since there’s only a small amount of gore (about the same amount you’ll find on a TV movie) and absolutely no nudity, but the satanic overtones may have many viewers picking another movie.

The little girl in the movie, Jessie Wade (Hutson), is written excellently, both as an exuberant young child, and as a slightly satanically possessed creature. Her brother Jimmy (Demetral) is also equally well-written. Where the movie falls short, however, is in the characterization of the mother. Denise Crosby is wasted in the role of this paranoid, semi-psychotic mother who is convinced from the start that her daughter is abnormally obsessed with Dolly (a correct assumption, but a little odd), yet doesn’t even notice when her daughter’s personality completely changes and she starts acting like an automaton. And never mind that no one notices the few dozen satanically possessed dolls wandering around.

On a scale of one to ten, this movie rates about a six and a half. The storyline behind the movie is mediocre, but the walking and talking dolls make up for it. The young boy is obviously the smartest of the entire lot, something that is typical of horror movies with children. It has the standard horrible ancient curse, but almost any movie regarding satanism or Central America does. I’d recommend it to anyone who’s a fan of cult movies or cheezy horror films, in particular “Child’s Play” (the first one) and “The Lightning Incident” (with Nancy McKeon), which are both extremely similar. 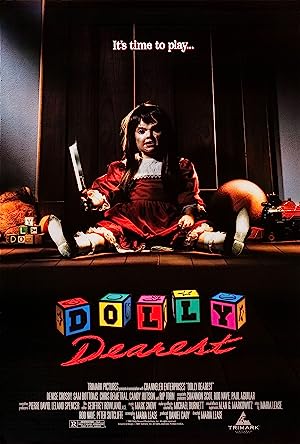 Be the first to review “Dolly Dearest 1991” Cancel reply