An intense and bizarre study of obsession that is by turns lyrical and disconcerting, Duffer tells the deranged story of a teenage boy torn between the womanly charms of a kindly prostitute, and the relentless, sadistic attentions of an older man.

As a fan of cult and surreal cinema I decided to view this rarely seen film and what a choice it was.

this itself is a bizarre study of desires, want and obsession, which is demonstrated perfectly with narration awkwardly placed making you feel uncomfortable which certainly isn’t a bad thing. The film disturbed atmosphere is only comparable to Lynch or Buñuel.

There is no wasted scene all of it is symbolic in a way, either if the film is a reality of a dream or a mix of both, you’ll keep on asking yourself that when you’re trying to decipher what fantasy/Parallel it is in.

But ultimately the film isn’t perfection or a masterwork the last quarter of the film even though it is not a wasted scene (as I mentioned above) it can be quite tedious but I’m guessing that the director was trying to make it longer by including these sets of scenes? I’m not too sure. 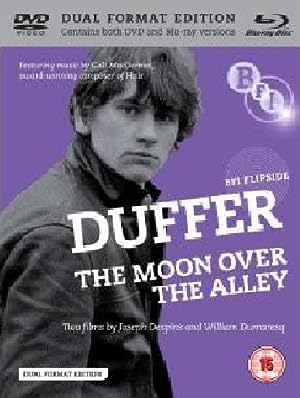 Be the first to review “Duffer 1971” Cancel reply