Tiffani and her friend Casey try to lure the gorgeous Zack with a phony online profile using the image of Tiffani’s buff ex, Ryan… which works fine until the real Ryan shows up. Only through some fancy footwork, advice from his Aunt Helen and mentor Harry, and a daring sexual escapade can Casey figure out how to set things right and perhaps even find the love he’s been seeking.

I was in the audience for Eating Out (Part One) at the LGBT Frameline film festival and, frankly, would have walked out if I hadn’t been trapped in the middle of the row. That having been said, I really enjoyed this sequel to a sequel of a sequel. The downside is that either the acting is still facile and sophomoric (the fatal flaw in the earlier film) or the direction was lacking. The upside is that the snappy one-liners are now really zingy one-liners, which may indicate that the problem was with the direction and not the cast. Confessionally, the nudity was a huge(okay, pun intended) plus. Michael E.R. Walker, in a supporting role,does double duty. If you want a deep,thought-provoking film that probes the gay psyche, this is not your film. If you would like to laugh (a lot) and, yes, be titillated, you won’t go wrong. 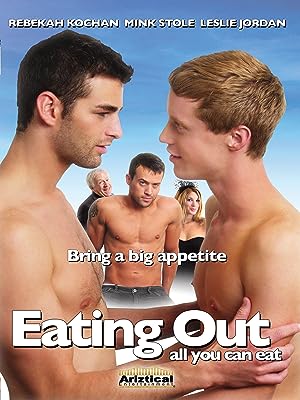 Eating Out: All You Can Eat (2009)
80 min|Comedy, Drama, Romance|09 Oct 2009
5.9Rating: 5.9 / 10 from 2,788 users
A gay Internet connection is made, but entanglements ensue due to hiding behind the name and photo of a straight male stripper who happens to return to the area.
Director: Glenn Gaylord
Creator: Phillip J. Bartell, Q. Allan Brocka (characters), Q. Allan Brocka
Actors: Rebekah Kochan, Daniel Skelton, Chris Salvatore, Michael E.R. Walker