Zack and his new boyfriend Benji are setting off to vacation at an all-male resort in Palm Springs with their friend Lilly. In light of the veritable smorgasbord of available men that are sure to be awaiting their arrival, Benji has proposed that he and Zack open up their relationship, just for the weekend. He’s not ready to limit himself sexually and explains that this will be a good way for them to explore together. Zack is less than thrilled with the idea, but he’s eager to keep Benji happy and, after all, he likes sex too. At the same time, Zack’s ex, Casey, is making his way to the same resort with his hag-in-training, Penny. Knowing that Zack will be there with his new boyfriend, Casey immediately goes into panic mode, recruiting his new friend, Peter, to be his pretend boyfriend for the weekend, proving to Zack that he’s had no trouble moving on from their relationship. It isn’t long before all plans go awry, and Benji starts making eyes at Peter, while Zack realizes he might not be as over Casey as he’d thought. With the gay boys otherwise engaged, Lilly and Penny are soon locked in combat for the attention of Luis, the resort’s sexy bartender, who also happens to be the sole straight man in sight. It’s complete sexual chaos as the various couples battle it out to win the object (or objects) of their affections.

This film is about several gay guys going to a hotel for a disinhibited weekend.

“Eating Out: The Open Weekend” is not an ordinary gay movie. It has the obvious commercial elements, such as having lot of provocative scenes (well, sex always sells). However, beneath the superficiality, the plot is so romantic and sweet. It tells two ex-boyfriends who have moved on, and yet they still love each other. One thing led to another, they discover what they really want in their lives, culminating in the most romantic ending. It is such a heartwarming love story. Together with the obligatory female best friends, “Eating Out: The Open Weekend” is a very entertaining romantic comedy. 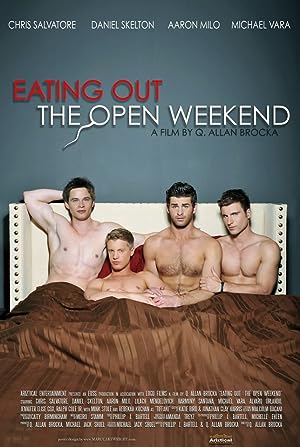