In his feature film directorial debut, comedian Bo Burnham deftly encapsulates the awkwardness, angst, self-loathing and reinvention that a teenage girl goes through on the cusp of high school. Given that the 27-year-old stand-up comic achieved fame as a teenager himself through YouTube by riffing on his insecurities, he is uniquely capable as the film’s writer and director to tell the story of Kayla, an anxious girl navigating the final days of her eighth grade year, despite creating a protagonist w female instead of male. Like Burnham did more than a decade ago, 13-year-old Kayla turns to YouTube to express herself, where she makes advice blogs in which she pretends to have it all together. In reality, Kayla is sullen and silent around her single father and her peers at school, carrying out most of her interactions with her classmates on Instagram and Twitter. Her YouTube videos are a clever narrative tool that provide insight into her inner hopes and dreams, much like an inspirational online diary. One of Eighth Grade’s biggest triumphs is in its realism.

Eighth Grade, directed by Bo Burnham, is a candidly witty and honest film about the life and times of super-relatable, awkward eighth grade student, Kayla, as she lives her way through her last weeks of middle school and prepares to enter the world of high school. From the beginning, the moviegoer is pulled into an awkward teen video blog being shot by Kayla, in which she discusses, with all of the stammering teen lingo, the importance of being yourself to her very scarce amount of viewers. After Kayla stumbles her way through this vlog, a bright, electronic, loud song comes on as we see Kayla walking up the sidewalk and into her school. Immediately the song pulls one into the story with its bright, vivid, upfront song, which abruptly ends as soon as the scene switches to Kayla sitting in her classroom. As can be seen throughout the movie, the music in this film is designed to be not background music, but foreground music, playing its own role in the film. The music lifts when Kayla is lifted, builds the tension in her anxious, nervous moments, and stops abruptly in big moments, as though the audience is personally in and experiencing the moment with Kayla. The plot line of the movie takes even the most ‘popular’ people back to middle school in that the awkwardness and pain of trying to fit in, as well as the joy in figuring out who you are so relatable that it hurts. The camera work with awkward close-ups, immediacy of confusing acts caught in slow motion, and montages that represent the sporadic-ness of the middle school girl’s mind follows the actions and thoughts of Kayla in such a way that the audience feels like they are reliving middle school with her, and maybe even through her. Much unlike other middle school or high school coming-of-age stories, the film beautifully and accurately explores the eighth grader’s journey in trying to figure out who they are and find their identity as a person with all of the awkward, painful, triumphant and hopeful moments that come with this stage of life. The moviegoer struggles with Kayla as she tries to find herself amidst trying to be someone she’s not. All in all, this movie can be hard to watch, but I think that that’s because it is honest and truthful about what eighth grade can be like. I think some will relate more to it than others, but ultimately, it’s a really well-done take on the struggle that is middle school. 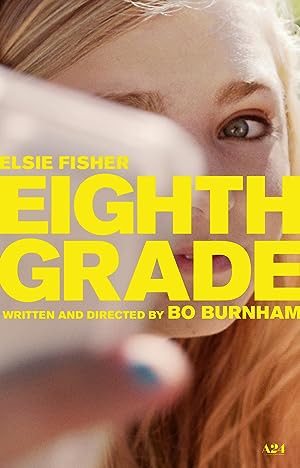 Be the first to review “Eighth Grade 2018” Cancel reply