A day in the lives of a group of average teenage high school students. The film follows every character and shows their daily routines. However two of the students plan to do something that the student body won’t forget.

I’ve never been a believer in Gus Van Sant the auteur. “Drugstore Cowboy” was a quasi-entertaining and promising first feature most notable for its pretty North Western scenery and the even prettier Heather Graham in her film debut, but nothing too special ever followed, and the “Pscyho” remake was an abomination on every level. Van Sant’s mainstream films were successful for reasons beyond his artistic input. “To Die For” heralded Nicole Kidman’s first tour de force, and “Good Will Hunting” launched the careers of Matt Damon and Ben Affleck for better and for worse.

Here, with “Elephant” Van Sant returns to the same pretty North Western scenery (just an in “Drugstore Cowboy” the movie was filmed on location in Portland, Oregon) and populates it with even prettier young men and women sleepwalking through an “interpretation” of the events of the Columbine Massacre. There’s an elegant listlessness to the camera-work as Van Sant lulls us into a beautifully mundane day in the life of some random high school students. There’s a creepy undercurrent, not only in the voyeuristic way in which he films his young charges, but also in the long lingering single shots of students walking through hallways and sidewalks from behind. Suddenly, as the plot of two alienated young men comes to fruition, you realize that the camera-work is meant to copy the “killer’s-eye-view” of the violent and sadistic video games the young men play before making it a reality at their school. There’s a rising tension that few film-makers have been able to craft, and for that Van Sant deserves accolades.

For all the artificial prettiness, this is without a doubt a highly disturbing viewing experience. In the end, some of it seemed too random (what was the point of the “Benny” character or the kiss in the shower?), and it culminates ambiguously with all the loose ends untethered. A more capable story-teller would have offered a conclusion, but all Van Sant leaves us is with some haunting classical music and beautiful shot of a cloud covered North Western sky. 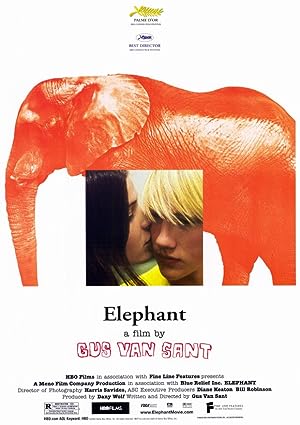 Be the first to review “Elephant 2003” Cancel reply