At a meeting of the game “Truth or Dare?” two young boys, Matthew and Maxime, are challenging to embrace. The kiss will cause them some excitement. From that time, teens who witnessed this scene are allusions more or less directly to the possible homosexuality of Maxime. A revelation will then destabilize the group.

Even with a nugget of a plot that runs also like a well-tuned mechanism of clichés, this short strikes home. It’s summer, it’s camping, it’s adolescence playing “Truth or Dare?” As everybody remembers the perennial dare and kiss a same-sexed (uneasy) friend is acted-out. Some insistence on the kiss attracts the expected stupid comments of adolescence starting out. But with the intervention of the superintendent more than three and in less than six minutes admit their sexuality, as summer heads back home. This little short, intended as part of a collection against homophobia, addresses mostly adolescents, and with the axis put upon the mostly effeminate image one expects from gayness, to the detriment, actually, of “virile” boys at a loss to admit their feelings. Thankfully, in this short the boy that expresses his not-so-repressed feelings, does not pass through an ugly scene of the usual bullying. This role is quasi-reserved for a girl; but instead of exemplifying any sense of misogyny, Vincent, the director, shows with a keen sense the antagonism between adolescents in just three strokes, an antagonism more fully depicted to excellent results in his sulfurous pastoral “Give me your hand”. 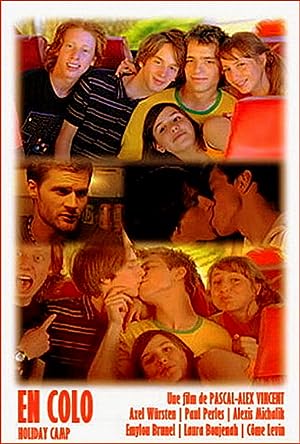 Holiday Camp (2010)
8 min|Short|18 Nov 2010
7.2Rating: 7.2 / 10 from 117 users
At a meeting of the game "Truth or Dare?" two young boys, Matthew and Maxime, are challenging to embrace. The kiss will cause them some excitement. From that time, teens who witnessed this …
Director: Pascal-Alex Vincent
Creator: Guillaume Nail (original idea)
Actors: Emylou Brunet, Laura Boujenah, Côme Levin, Axel Wursten

Be the first to review “En Colo 2010” Cancel reply