19 year old Jamie just wants someone to love. With no one to call his own he just decides to put an end to it all. That is until a visitor from beyond shows Jamie that his life has meaning and that he needs to stay alive and fulfill his destiny. But the visitors motives may not be all for the good in this over the top throwback to the casual sex, clothes optional adult comedy.

Babaloo Studios seems to be a step ahead of other video companies that make films about the way gay men live today as you will see in their latest release, “Enemies with Benefits”. It is not only clothing optional but is filled with sex and lots of erect penises on young gay guys. I actually had to stop watching to catch my breath a few times. This is an adult comedy that does not have many laughs but sure has a lot to see—-I often joke that this is the kind of movie to watch with a mop nearby. Steven Vasquez wrote the screenplay about Jamie (Chance Feandro), a nineteen-year-old guy who is looking for love but because he has been unable to find the right guy, he contemplates ending his life. But just as he makes his decision, he gets a visitor from the other world who shows him that life has meaning and that it is best to stay alive and deal with destiny rather than just disappear.
However, we see that this advice might not be the best for someone who is floundering and a life of casual sex replaces a life of importance. With a full cast you young gay men who made for wonderful eye candy we get a look at gay life that we used to only be able to see in porno films. The cast includes Edward Guiterrez, Desi Santana, Steven Bright, Marshall Thomas, Grayson Lange and Addison Graham.
I understand that the film is made up of deleted footage and odds and ends from other films of director Vasquez. He smartly decided that we should all have a chance to see it and he built a story around it but I doubt that anyone watching this will be looking for a story when they can feast that eyes on penises doing all kinds of things and attached to all kinds of hot young guys who seem to have no problem with doing it all on camera.
This may be something new for others to follow—never throw away what is on the cutting room floor; you never know when you get piece together a film out of it. I am sure that took more work than shooting an entire new film. Speaking with Vasquez, he shared how this came to bit and I was amazed listening at all he had to especially with the shots that were filmed before digital when analog was the way to go. We also forget how quickly youngsters change from year to year so I must admire the technique used here even if this is not the kind of film that I usually watch. 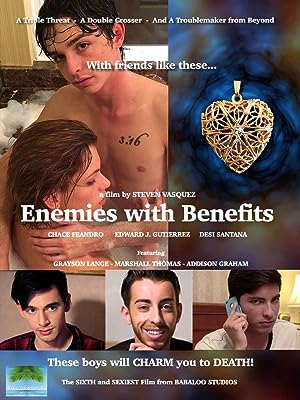 Enemies with Benefits (2016)
65 min|Adult, Comedy|15 Jan 2016
4.9Rating: 4.9 / 10 from 54 users
19-year-old Jamie just wants someone to love. With no one to call his own, he just decides to put an end to it all. That is, until, a visitor from beyond shows Jamie that his life has …
Director: Steven Vasquez
Creator: Steven Vasquez
Actors: Chance Feandro, Edward Gutierrez, Grayson Lange, Marshall Thomas

6 reviews for Enemies with Benefits 2016