A young boy discovers a deadly alien creature and winds up entangled in a top secret government operation.

A young boy in military holding; photographs of destruction and mayhem in front of him. The officer demands answers – meanwhile in the film we flashback to an earlier time as the boy takes his older brother into the corn fields to show him a new friend he has made.

A few years ago now I watched Super 8 a few times and enjoyed it for all its reference points but confidence in itself. Apparently the makers of this film also watched that, along with many other Spielberg-produced films and other sci-fis down the years, because this is a film that really has been built off bits from other films. To start with the area where it is very positive – the effects. The makers have done a great low-budget effort here, making their alien fit into the landscape and interact with real things really well indeed. It moves smoothly and looks great; indeed the sound effects and whole design looks really good (including the rich green/yellow/blue Americana color scheme).

So as a technical base to build your film on, it is a great start; but it is a terrible place to stop – and it does stop there. From these strengths what we get is narrative and character lifted straight from other films without any attempt to stop them being clichés. The film throws in something about loss of parents but it is all just words because almost everything feels like it was done just to get the effect something to happen within – which I guess is pretty much how they approached it. The soldier, the kid, the alien, and so on – all poor; heck, even the alien looks and sounds like a robotic Predator.

The plot unfolds as you expect, not really caring about anything working so much as just making something happen; even the ending makes no sense. It is a shame but this is a perfect example of having great FX skills and trying to force them into a short film to showcase them; in this case it is unfortunate because technically it is impressive in many regards, but the writing and characters lack anything of spark, originality or invention. I mean, it even has lens flare in the daytime – that is how keen it is to copy without thinking about whether it works or not. 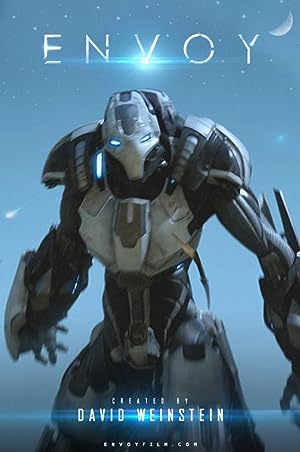 Be the first to review “Envoy 2014” Cancel reply