A psychiatrist, Martin Dysart, investigates the savage blinding of six horses with a metal spike in a stable in Hampshire, England. The atrocity was committed by an unassuming seventeen-year-old stable boy named Alan Strang, the only son of an opinionated but inwardly-timid father and a genteel, religious mother. As Dysart exposes the truths behind the boy’s demons, he finds himself face-to-face with his own.

This is Richard Burton’s most powerful performance. It his his story that gives the movie’s its narration. Although this is the story of Peter Firth’s character and his struggle with his love and connection with horses, it is Burton’s power that makes this movie deep. Anyone in the field of psychology and / or therapy needs to watch this movie. It is a story of ones search of meaning and redemption. Somewhat hard to understand at times, this is more than a story about a young man and his confusion with life and his beliefs. Jenny Agutter is once again pure eye candy. To say she is Posh is beyond fact. Although she has a limited role, her time spent on screen is great. Each time she appears, she lights up the screen with her beauty. Still, it is the power of Burton and Firth that makes this drama somewhat of a masterpiece. 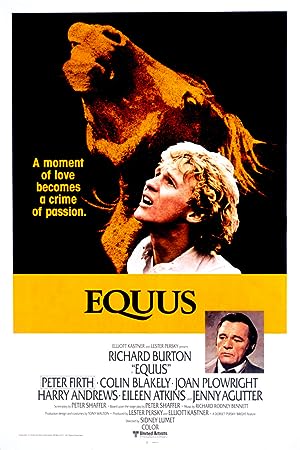