The odds were stacked against Ramón (Manuel Lozano) from the start. He was always an outsider, and to keep himself sane, he lived by a strict mantra: Don’t Fight, Don’t Snitch and Don’t Cry.

When his family settles in Seville, Ramón becomes victim to the attention of the school’s most notorious crowd. As the death of dictator Franco sends shockwaves throughout Spain, the hairline cracks of rebellion and independence begin to appear.

A budding romance, a covert Religion teacher and a mythical Native Indian all collide in Ramón’s world as he ultimately learns that one of the most important and enduring things in life is true friendship.

Like TV-series “Cuéntame cómo pasó”, “Eres mi héroe” is set in the 1970’s and tells the story from the point of view of a child/teenager. For those who ask for a minimum of realism, the good news is that all similarities between “Cuéntame” and “Eres mi héroe” end up just here.

Not that “Cuéntame” is a bad series (I actually like it), but one should watch it knowing that it is a bucolic retelling of those extremely important years in Spanish history. On the other hand, “Eres mi héroe” gives a more realistic and edgier account of both childhood/teenage life and the Spanish transition. Therefore, everyday coming-of-age problems get mixed with political problems surrounding the protagonist, and the eventual result is an entertaining yet acceptably rigorous account of those convulse years.

Manuel Lozano, the child from “La lengua de las mariposas”, has grown up to be a nice teenage actor who gracefully plays Ramón, the main character. Supporting turns from Maru Valdivielso, Juan Fernández and (surprisingly) Toni Cantó are very welcome, but the real standout is the discovery of young actor Félix López, who plays Ramón’s pal David. It’s not that often that one sees two believable juvenile performances in the same film, and Lozano and López also show great chemistry in their scenes together.

The only part I didn’t buy was Antonio Dechent’s ridiculous part as an Indian Chief, a character that adds absolutely nothing to the plot and really takes the focus from more interesting subplots. I understand this is a device the writers use to portray the boy’s coming-of-age process, but I really could have lived without it. I would rather have seen more scenes involving priest Toni Cantó or the boy’s family.

Anyway, the movie is interesting enough and quite entertaining too. Overall rating: 8/10 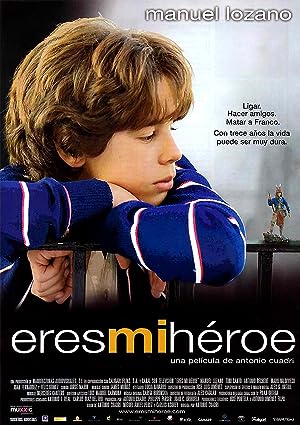 You're My Hero (2003)
102 min|Comedy, Drama|30 May 2003
7.2Rating: 7.2 / 10 from 308 users
The odds were stacked against Ramón (Manuel Lozano) from the start. He was always an outsider, and to keep himself sane…
Director: Antonio Cuadri
Creator: Carlos Asorey, Antonio Cuadri
Actors: Manuel Lozano, Toni Cantó, Félix López, Antonio Dechent