Evan White is unjustly accused of selling marijuana and cocaine and being threatened with up to 28 years in jail by an ambitious Federal prosecutor.

Evan’s Crime is the story of a young guy who’s in a decent band, has a beautiful girlfriend (Annika Noelle) and bright future. That is, until he and his friends get busted with drugs. The drugs aren’t Evan’s, although he did smoke a little pot…

The legal minefield Evan and company find themselves in is described as an “every man for himself” situation, with friends throwing each other under the proverbial bus in order to try to stay out of jail. Inexplicably, Evan finds himself facing an outrageous 28-year sentence for the utterly drummed-up allegation of dealing cocaine and collaborating with Mexican cartels. It’s a raw and painful nightmare scenario. And, it’s all David Arquette’s fault.

Arquette, in a very noteworthy dramatic turn, plays an aggressive federal prosecutor who’s looking to make an example of Evan in order to further his own political aspirations. As the story unfolds, Arquette’s character becomes more layered, more essential and more front-and-center. For an actor so steeped in a history of genre roles and a goofball persona, it’s great to see him exercise his dramatic chops, and nail it.

The entire cast, as directed by filmmaker Sandy Tung, is exceptional. Douglas Smith (Big Love) scores a win carrying the film as the title character. Smith, channeling an inner brokenness and deadened soul, communicates the weight of the personal consequences of the U.S. judicial system run amok. Evan’s spiral is like something out of film noir, where the undeserving everyman is targeted and tormented for no good reason. For all of the film’s 95 minutes, through all of the character’s turns, Smith makes the part his own.

Director Tung captures the action with a documentary-like sparseness. His cameras are handheld, his locations are unpolished, and the editing is mostly straight cuts. The style, the subject matter, and very harsh edge to it all, at a glance, pits Evan’s Crime in direct contrast with the numerous well-received family films that make up much of Tung’s filmography. (including the award winning Saving Shiloh, and the tween comedy Alice Upsidedown.) Yet, like his family films, Evan’s Crime has a moral center, a relatable worldview, yet never preaches or panders.

The biggest shortcomings of Evan’s Crime are of the entirely forgivable variety. The noticeable lack of production value is reflected in the obvious low budget and apparent hurried shooting schedule. Yet, the rough edges these filmmaking realities inflict — it was no doubt either suffer through with limited resources, or don’t make the film at all — do not ultimately detract, and in fact, in a sense, set it apart from the herd of other dramatic message films.

Evan’s Crime has the courage not to take the easy way out in terms of its message. Never does it say “choose your friends wisely” or even “don’t smoke pot”. But it does demonstrate that even when life crushes us, there are still decisions we can make in terms of how we treat others, and how we act on the injustices done to us.

Those willing to venture into these dramatic and weighty Louisiana waters will no doubt pardon Evan’s Crime as film that they won’t soon forget. 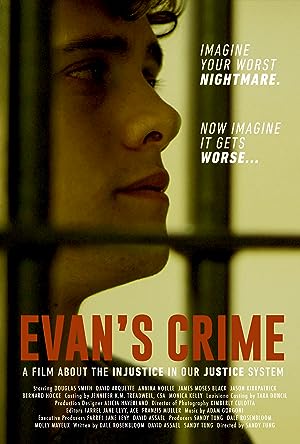 Be the first to review “Evan’s Crime 2015” Cancel reply