It’s the early twentieth century Sweden. Adolescent siblings Alexander and Fanny Ekdahl lead a relatively joyous and exuberant life with their well-off extended paternal family, led by the family matriarch, their grandmother, Helena Ekdahl. The openness of the family culture is exemplified by Helena’s now deceased husband ending up becoming best friends with one of her lovers, a Jewish puppet maker named Isak Jacobi, and their Uncle Gustav Adolf’s open liaison with one of the family maids, Maj, who everyone in the family adores, even Gustav Adolf’s wife, Alma. Between the siblings, Alexander in particular has inherited the family’s love of storytelling, his parents and his grandmother who are actors and who manage their own theater. Things change for Alexander and Fanny when their father, Oscar, dies shortly after Christmas 1907. Although she truly does believe she loves him, the children’s mother, Emilie, decides to marry Bishop Edvard Vergérus, who she first met as the officiate at Oscar’s funeral. She also wants a father figure for the children. Going into the marriage, Emilie has inclinations that it will be a much different life than she had with the Ekdahls, but is not prepared for the harsh, austere and strict life Edvard rules with an iron fist. Emilie, Alexander and Fanny end up being prisoners in the bishop’s stark and humorless house. As Alexander butts head with his stepfather and tries to learn how to keep to his own principles while obeying Edvard, Emilie tries to figure out a way to regain her and her children’s own destiny, as Edvard will not consent to divorce, and her “desertion” in the eyes of the law means that Alexander and Fanny would become his wards.

I am not one for putting up idols on pedestals; mostly Bergman’s films leave me tepid or even cold. But Fanny och Alexander is a splendid production, beautifully made, so superb it even evokes feelings of having come from a novel. Excellent characterization throughout, all the way down the cast, lending that magic touch to the costuming of the early 1900s. Mesmerising throughout, the film is not a single minute too long. The development of the story-line is superbly handled in an absorbing and coherent manner, manifesting the great empathy between director and actors. If the cinematography is visual poetry, the script is philosophical and full of awareness or consciousness of things in life, but not at a pretentious, abstract and theoretical level, but at a real human dimension.

If you only have 10 videos in your collection, Fanny och Alexander should be one of them. My vote is a bit higher than the IMDb average.

These comments refer to the 3-hour version. 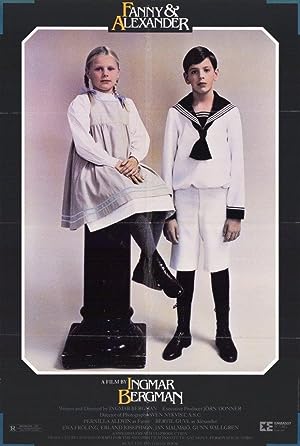