In the desert no one can hear you scream.

Eric (though he prefers Ricky) is unhappy that he has to leave Paris for a week to visit his grandfather on the farm. He’d much rather practice his dance routines with the boys he hangs out with.

His grandfather is a rough no-nonsense farmer who’s got little patience for a spoiled boy from the city. Plus Ricky is gay and has never come out to his grandfather and doesn’t like the idea of having to be closeted for the week.

However Ricky is intrigued by the new farmhand Jean-Didier who is features prominently in Ricky’s cowboy oriented fantasies.

When Ricky’s two friends show up from the city, the irrepressibly gay boys shake things up and amid several discoveries; Ricky and his Grandfather connect on a new level.

This light hearted short is polished and well made and the boys are easy on the eye and while there are some spots that ring untrue, I look forward to seeing more of this director’s work. 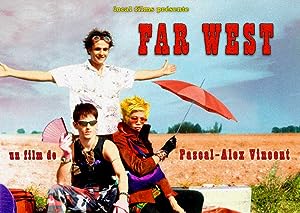 Be the first to review “Far West 2003” Cancel reply