In an attempt to reconnect with his son Danny, successful Wall Street broker Will takes his family on a vacation to the cabin where he grew up. While Will and Danny are hunting, their trip takes a deadly turn when they witness the murder of a crooked police officer as a bank robbery goes awry. When Danny is taken hostage by the criminals, Will is forced to help them evade the police chief investigating the murder and recover the stolen money in exchange for his son’s life.

The big doin’s in Granville, Ohio a few months back come to the big screen this weekend with the Central Ohio premiere of First Kill, a thriller about …big doin’s in Granville.
Sheriff Howell (Bruce Willis) calls a recent bank heist, “the biggest crime to hit Granville in decades,” and he warns old acquaintance Will Beamon (Hayden Christensen) to keep alert while he’s in town as there’s some dangerous fugitives on the run.
Will’s a hometown boy who made good in New York as a slick Wall St. broker with a hot big city wife (Megan Leonard). But, with their young son Danny (Ty Shelton) having bully problems in school, Will figures the best medicine is a family deer hunting trip back to his old stomping grounds.
Things go awry when father and son see something they shouldn’t, and suddenly Will must recover the stolen bank loot before Chief Howell does and use it as ransom for Danny’s safe return. 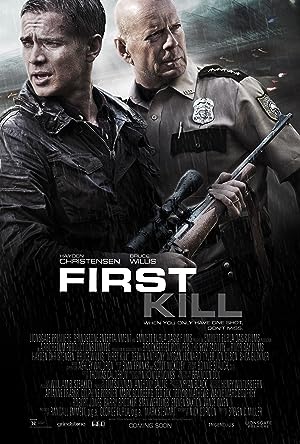 Be the first to review “First Kill 2017” Cancel reply