Based on V.C. Andrews’ controversial cult-classic novel, “Flowers in the Attic” tells the story of the Dollanganger kids who, after the unexpected death of their father, are coerced to stay hidden in the attic of their ruthless grandmother.

An idealized, idyllic and seemingly wealthy 1950s family of six is suddenly hit with great tragedy. Stripped of their material goods, the family must move into an isolated Gothic mansion. In Virginia, “Foxworth Hall” matriarch Ellen Burstyn (as Olivia) gives them a frosty welcome. She insists the “four beautiful children with blonde hair and porcelain skin” must live in the attic, because their ailing grandfather disapproves of their existence. Conniving mother Heather Graham (as Corrine Foxworth-Dollanganger) hopes to inherit her father’s estate, but must keep her children a secret until the old man dies. Increasingly neglected in the attic, the eldest children struggle to care for the younger twins as skeletons fall out of the mansion’s closets…

Ending with awkward abruptness, this is the first in a series of “Lifetime” TV movies based on Virginia C. Andrews’ popular stories. A previous feature film cut subplots involving incest from the story, but this version includes the incestuous feelings. The “taboo” subject was an important part of the original novel, but it doesn’t translate well. When we first see two of the characters in question, they have clearly experienced the “body changing” developments latter referred to in the script. They talk about school and appear at a well-attended party (unlike the novel). Since sexual interest has begun, their attraction is more difficult to accept. In most school settings, the top physical condition of these two would not go unnoticed by most classmates…

Attractively proportioned co-stars Kiernan Shipka (as Cathy) and Mason Dye (as Christopher) handle the leading roles better than expected. Still, when he gives her a cool “punk” hairstyle, we wonder who cuts and shaves Mr. Dye’s always neatly trimmed hair. The young stars and director Deborah Chow excel in reaction shots. In the supporting roles, Ms. Graham and Ms. Burstyn are engaging. Graham’s character is cast to the wind, unfortunately; to really impress, she needed a couple more scenes. Possibly at her own insistence, Burstyn’s character is more fully realized; this actress brings something extra to the role and is more intuitive about the medium. The six producers had to be happy with art/set direction and Miroslaw Baszak’s photography. 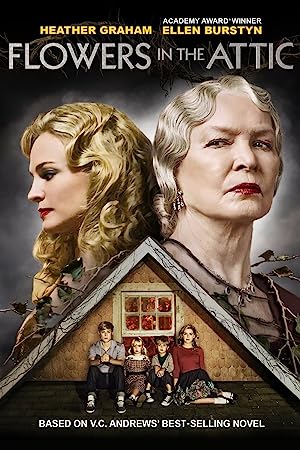