A former Asian Games record breaker and Olympic tryout, Kim Gwang-su, endures beatings, abuse, and constant ridicule from his swimming coach. To justify this abusive behavior, his coach constantly reminded Gwang-su – this is for your own good!

Joon-ho (Jae-Sang-Yoo) loves to be in the water to swim freely for the enjoyment. He swims the 200 freestyle in school competitions but due to a lack of focus and concentration in races always seems to finish in fourth place. His mother Jung Ae (Hang-na-lee) grows increasing distraught with each fourth place finish. She wants Joon-ho to win metals, go to University on a swimming scholarship and bring prestige to the family. The film’s prologue shot in black and white flashes back to successful Korean athletes in the late 1990’s bringing glory to the country and pride to their families. We meet Gwang -su (Have Joon- Park) a leading swimming hero of that time who’s talent made him a nation record holder despite a horrible training habits. After he returns from a 10-day stint of missed training sessions days before an international meet his coach employs extreme corporal punishment that results in Gwang-su walking away from the sport.

16 years later Hang-na-lee turns to Gwang-su to train her son one on one to elevate him to the top of the podium. Jun-ho’ daydream attitude persist angering Gwang-su leading him to employ the same corporal punishment that had be administered to him. In Gwang-su mind if his coaches had been harder on him he would have had full glory of a swimming career himself.

Director Ji-woo Jung makes a strong statement on corporal punishment, which has been always a decisive issue in South Korea. Jung film strongly shows that its the not the way to train or discipline a child. The director makes sure to include a complicit parent in the willing to look the other way as long as the practice achieves the desired results. The productions team breaks new ground filming the swimming races. There are three main races in the piece and each is shown differently bring the accidence closer to the actions with each successive race culminating with the last one where the viewer is literally in the pool with Jun-ho.

Cinematographer Kang Min-Woo work warrants special mention. His work with the underwater swimming scenes especially the sequence after hours is truly memorable. Woo’s use of light in the pool and the reflections peeking though the coiled lane ropes give the impression that a spaceship has landed on the surface of the water with Joon-ho swimming around freely in the depths below.

Hang-na lee leads the cast at Joon-ho’s mother. She wants her son to win medals and will do anything within her power to make it happen. She is aware of the treatment her child is enduring under his new coach but after a second place finish the first time out off the shoot chooses to ignore her sons suffering. Hang-na lee actually remarks that she would rather see her child get beaten then come in fourth place.

Fourth place is a raw brutal and frank presentation of corporal punishment used as a motivator in Korean society. Director Ji-woo Jung is clearly against the practice using this story as an educational piece to his fellow citizens. The easy by which former victims pass down the practice is also highlighted in the production. The film presents a strong lesson for athletes, students, coaches teachers and parents alike. 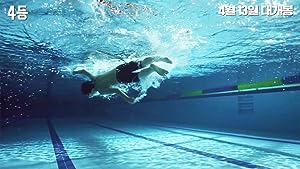